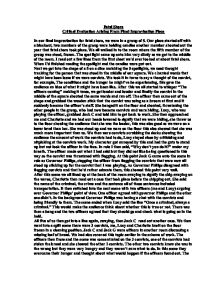 Fatal Shore Critical Evaluation Arising From Final Improvisation Piece In our final improvisation for fatal shore, we were in a group of 5. Our piece started off with a blackout, two members of the group were holding candles another member shouted out the year that fatal shore took place. We all walked in to the room where the fifth member of the group was stood, frozen. The spot light came up onto him very dimly as we got to the middle of the room. I read out a few lines from the first sheet we'd ever looked at about fatal shore. When I'd finished reading the spotlight and the candles were put out. Next we got into the shape of a 5 on a dice matching the 5 spotlights, we used thought tracking for the person that was stood in the middle of our square. We chanted words that might have been issue if we were convicts. We took it in turns to say a thought of the convict, for example, The conditions and the hunger he might've be experiencing, this gave the audience an idea of what it might have been like. ...read more.

My character got annoyed by this and had the guts to stand up but not look the officer in the face. In role I then said, "Why don't you do it?" under my breath. The officer made out what I had said but they did not like being questioned in this way so the convict was threatened with flogging. At this point Jack G came onto the scene in role as Governor Philips, stopping the officer from flogging the convicts that were now all stood up sticking up for the convict that I was playing. As Governor Philips disagreed with flogging convicts and that he'd rather educate them, this showed this point very well. After this scene we all lined up at the back of the room swaying to signify the ship swaying on the waves, Charlotte then read out a case that took place before the shipping out. She said the name of the criminal, the crime and the sentence all of these sentences included transportation. It then switched into the next scene with two officers (me and Lucy) ...read more.

In this scene they overcame their hunger and thought about what would happen if the officers found out. The officers then came into this scene to try to find the bread. They were being very threatening and they had convinced themselves that the convicts definitely had the bread. One officer went round, threatening and challenging each convict. This showed the audience how threatening and violent the officers could get. When the officers got to charlotte they were convinced she had the bread so they told her to stand up, sure enough she had the bread and the two officers agreed that she would be flogged. She was dragged off the stage and there was scream representing the whip hitting her and then the lights blacked out to end the piece. This whole piece was effective as is showed the audience how bad the convict's lives were on the ship. I thought other people's work was good when in one piece, a children's game turned into a violent scene on the ship. Also when people were being aggressive it was very convincing. I thought overall the pieces all worked very well because they all conveyed life in fatal shore well. ...read more.