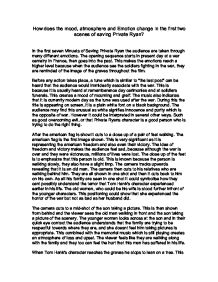 Film studies micro reading How does the mood, atmosphere and Emotion change in the first two scenes of saving Private Ryan?

How does the mood, atmosphere and Emotion change in the first two scenes of saving Private Ryan? In the first seven Minuets of Saving Private Ryan the audience are taken through many different emotions. The opening sequence starts in present day at a war cemetry in France, then goes into the past. This makes the emotions reach a higher level because when the audience see the soldiers fighting in the war, they are reminded of the image of the graves throughout the film. Before any action takes place, a tune which is similar to "the last post" can be heard that the audience would immideatly associate with the war. This is because it is usually heard at rememberence day cerimonies and at solidiers funerals. This creates a mood of mourning and greif. The music also indicates that it is currently modern day as the tune was used after the war. During this the title is appearing on screen, it is a plain white font on a black background. The audience may find this unusual as white signifies innocence and purity which is the opposite of war. However it could be interpreted in several other ways. Such as good overcoming evil, or that Private Ryans character is a good person who is trying to do the right thing. After the american flag is show it cuts to a close up of a pair of feet walking. ...read more.

He is begining to cry as he sees the graves. Seeing this old man cry makes the audience feel slightly awkward. They cant comfort him as too much terrible stuff has happened in his life, they feel like how his family that are around him would feel. The Music becomes more continuous and slowly louder as he walks through the graves. The camera is tracking along with him. It slowly zooms out to reveal the intensity of just how many people are burried there. The graves go on as far as the audience can see. This amount of graves is a shocking sight to the audience and may upset many people who never really understood just how many lives were lost. The scene end with a slow zoom into the old man eyes. He does not say anything or have drastic facial reactions, all his emotion is conveyed through his eyes. This makes the audience realise that the things he have seen is his life have not been pleseant and have haunted him everyday since the end of the war. Also because he is just staring at the grave it gives the impression that he is thinking back in time. This then cuts into the past, so we are watching his thoughts. The sound also adds to this illusion becuase slowly the sound of the waves can be heard aswell as the music. ...read more.

The high-angled shot suggests their power and makes the audience feel more tense. The camera follows Tom Hanks chacter as he makes his way up onto the beach. He stop to hide behind one of the mettle X's as he has lost his hat and become very vunerable. As he is there the sea can be seen in the background, the small wave coming in next to hime is dark red. This is showing the audience how many men have just died in those short seconds. Again creating a mood of tension and sorrow. The action is taking place in slow motion, as we are now seeing the events happening as Tom Hank's character is seeing them. The slow motion and muffled sound indicate how his character is feeling. His hearing is impaired due to the loud explosions and he is in dis-belief about what he is seeing. These two scenes make the audience react very differently because of the change in atmosphere from one to the other. In the first scene the only word spoken is "dad" and this doesnt get any verbal reaction. The entire scene is created by the music and the images shown to the audience. This is very effective as it doesnt disturb the mood of saddness. However the second scene is completely different. The sound effects are extremely loud and the images shown are very disturbing. This makes the audience go from feeling sad to feeling shocked and scared. ...read more.