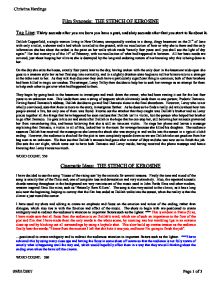 Film Synopsis: The Stench Of Kerosine

Film Synopsis: THE STENCH OF KEROSINE Tag Line: Thirty seconds after you are born you have a past, and sixty seconds after that you start to lie about it. Delilah Copperfield, a single woman living in New Orleans, unexpectedly awakes in a damp, dingy basement on the 21st of June with only a toilet, a shower and a bed which is nailed to the ground, with no recollection of how or why she is there and the only information she has about the ordeal is the paint on her walls which reads "exactly four years until you shall see the light of day again." Her last memory is of the 14th of February, with no recollection of what had happened in between. All her basic needs are covered, just about keeping her alive as she is destroyed by the long and enduring torture of not knowing why this is being done to her. On the day she exits the house, exactly four years later to the day, having woken with the only door in the basement wide open she goes to a western style bar as her first step into normality, and in a slightly drunken state begins to tell her bizarre tale to a stranger at the table next to her. ...read more.

I have used my shots and editing to create an emphasis and focus on the emotion and action of the ending, rather than dialogue, which also ties in with the function and effect of the music. The shots to begin with are positioned to create ambiguity and to redirect the audience's attention to important factors such as the lighter. *** This is evident in frame (5) as, I have made sure that all focus from the audience is on Delilah's word, which are of such an importance to the flow of the plot and film that I have made them the only words in the whole scene, by zooming into her trembling lips in an extreme close up and by blacking out all surroundings by using a keyhole shot. This slow build up creates tension as the audience finally hear the words; "I knew from the moment I left that s**t hole it was you, and know I'm going to finish the job". ...positioned to create ambiguity and to redirect the audiences attention to important factors such as the lighter. ***I have achieved this by using many close ups and having the focus in some shots off centre so that the audience is not fully aware of exactly what is happening until the very end, which would hopefully effect them in a way that they are still thinking about the ending even when the have left the cinema. ...read more.

In fact, during the making of memento Brad Pitt auditioned at the peak of his Hollywood career, but was turned down for this exact reason. For the same reason I would not expect the film to be distributed nation wide, but begin in select cinemas such as the Covent Garden Odeon and the Clapham Picture house, where art house films such as the Japanese old boy began, then expanding as it proved to be extremely popular. The film should not prove to cause any problems with regulation or censorship and I would expect an average sized budget of around...from a smaller company such as...who aim to take in small scale films. Thus, I feel my sequence successfully works as both a process and a product having researched carefully using both the internet and a target audience to look over my work. WORD COUNT: 543 A clear improvement in evaluation has taken place with the best candidates reflecting on process, product, audience (actual) response through peer (and others') feedback and the validity of that response. Many candidates are, however, still producing descriptive pieces which offer no evidence of applied learning, and appear to have been produced in a last- minute, throw-away manner. Candidates should have the importance of the evaluation impressed upon them, and equally the importance of drafting their work to improve their overall grade. Christina Hardinge 09/05/2007 Page 1 of 3 ...read more.