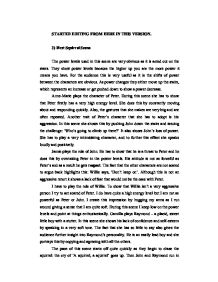 STARTED EDITING FROM HERE IN THIS VERSION. 3) First Squirrel Scene The power levels used in this scene are very obvious as it is acted out on the stairs. They show power levels because the higher up you are the more power it means you have. For the audience this is very useful as it is the shifts of power between the characters are obvious. As power changes they either move up the stairs, which represents an increase or get pushed down to show a power decrease. Anne-Marie plays the character of Peter. During this scene she has to show that Peter firstly has a very high energy level. She does this by constantly moving about and responding quickly. Also, the gestures that she makes are very big and are often repeated. Another trait of Peter's character that she has to adopt is his aggression. In this scene she shows this by pushing John down the stairs and issuing the challenge: 'Who's going to climb up there?' It also shows John's loss of power. She has to play a very intimidating character, and to further this effect she speaks loudly and positively. Jamie plays the role of John. ...read more.

The girls are taunting him from the higher platforms, while he is curled up on the floor saying 'please don't'. The difference in voice tone highlights the difference in power: Donald's is a soft, almost desperate plea, whereas the girls have a harsher, harder tone. In our group Laura plays the character Audrey. She has to make her character seem nasty and aggressive. She shows this by the she says, 'Why should you be mummy all the time'. It is spoken in a very spiteful tone and she crosses her arms and stamps her feet to give the impression that she is very angry. Lucy plays the role of Angela, a friendly and popular girl. She shows this by talking an interest in Donald and playing nicely. For example when she says 'Poor, poor Donald' her tone is soft and her arm is around him. However, at the end she becomes loud and harsh when she is mocking Donald. This demonstrates that her character is very fickle and will simply follow the others. Donald Duck is a very shy character and doesn't seem to fit in with the rest. The tone of his voice is soft and his gestures are small - he is almost the complete opposite of Peter in this respect. ...read more.

The ribbon will be tied to the wrists of Donald Duck and when the fire starts he will begin to loosely shake his wrists. This creates a ripple effect as though the ribbons are the start of the fire. Also, the ribbons may also serve a double purpose to remind the audience that they are children even though adults are playing them. As the fire builds up Donald moves his arms vigorously so that the ribbon is moving all around him creating the effect of an uncontrollable fire. The black sheet is held by the corners by Raymond and Willie on one side and Audrey and Angela on the other. At the climax, when the fire comes to its peak, they drop the sheet so it floats down and lands on Donald, This represents his death and it is significant that the colour black is used as it is closely associated with death. When fire is getting vigorous the orange and red lights flash on Donald to give the effect that he is in the middle of an uncontrollable disaster. When the black sheet lands on him there is a blackout to end the climax and to symbolize the end of Donald's life. The audience will be able to relate to what has happened and they will be left feeling upset and disappointed as they have seen children behave 'in new eyes'. ...read more.