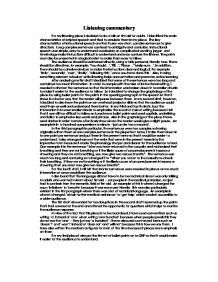 For my listening piece I decided to do a talk on first aid for adults.

Listening commentary For my listening piece I decided to do a talk on first aid for adults. I identified the main characteristics of scripted speech and tried to emulate them in my piece. The key characteristics of instructional speech are that it uses very short, concise sentences to give directions. Long complex sentences can lead to ambiguity and confusion. Instructional speech uses simple, easy to understand vocabulary as complicated wording, jargon and terminology make instructions difficult to understand and may confuse the listener. The points must also be presented in a logical order to make them easy to follow. The audience should be addressed directly, using a fairly personal, friendly tone. There should be directives, for example, 'You should...', 'Fill...', 'Place...' 'Make sure...'. In addition, there should be cohesive devices to make the instructions clear and logical. For example 'firstly', 'secondly', 'next', 'finally', 'following this', 'once you have done this.' ...read more.

Also in the graphology of the piece I have used dashes in order to more effectively show where the reader would give a slight pause. An example is in 'a hundred compressions a minute - just under two a second'. In the third paragraph in particular, the sentences were too complex so having originally written them as one complex sentence in the pluperfect tense, I broke them down in to one point per sentence and put them in the present tense so that it would be easier to understand. I also changed some of the verbs that were in the present tense into the imperative form because it made the phonology sharper and clearer for the audience to hear. One example is in the sentence "After you have returned to the casualty and rechecked their breathing and they are not breathing or if the likely cause of unconsciousness is trauma or drowning and they are not breathing, you now give two rescue breaths". ...read more.

An example is where I changed 'obtain further medical assistance' to 'get help' which made it accessible to a wider audience. The first draft also ended far too abruptly so in the second draft I summed up the points that I had covered at the end and offered the opportunity for questions which helps to monitor the audience response. In view of the fact that this piece is to be read aloud, I have used conventions such as writing 'a' instead of 'one' when writing 'one hundred' because when people speak this they do not say the 'one' - they just say 'a hundred'. I have also used contracted forms such as 'doesn't' and 'won't' instead of 'does not' and 'will not' because this is how we say them. I have also written the numbers as figures for most of the time because it places more emphasis on them. For my final piece I also put the first set of bullet points on to OHP so that it would make it easier for the audience to understand. ...read more.