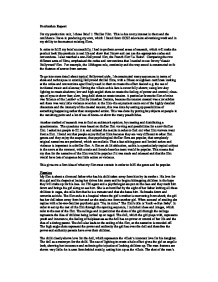 For my production unit, I chose Brief 1: Thriller Film.

Production Report For my production unit, I chose Brief 1: Thriller Film. This is due to my interest in them and the confidence I have in producing my own, which I found from GCSE television advertising work and in my ability to deconstruct existing films. In order to fulfil my brief successfully, I had to perform several areas of research, which will make the product look like products in real life and show that I know and can use the appropriate codes and conventions. I also watched a non-Hollywood film, the French film 'La Haine'. Comparing the two different sorts of films, emphasised the codes and conventions that I needed to use for my 'classic Hollywood' film. For example, the 180degree rule, continuity and the way sound is constructed to fit the distance of source from camera. To go into more detail about typical Hollywood style, I deconstructed many sequences in terms of shots and techniques in existing Hollywood thriller films, with a fifteen or eighteen certificate looking at the codes and conventions specifically used in them to create the effect desired e.g. the use of incidental music and silences; filming the villain so his face is never fully shown; using low-key lighting to create shadows; low and high angled shots to create the feeling of power and control; close-ups of eyes to show fear; slow, long-held shots to create tension. A particular favourite film of mine was 'Silence of the Lambs'- a film by Jonathan Demme, because the tension created was a lot subtler ...read more.

The doll as a metonym for the child. The use of lighting to create a halo effect gives the girl an angelic look, showing her innocence and enforcing the injustice of locking children up. The man features are shown very little- he is seen from behind mainly, setting him up as the villain. The shot of the man's hand coming through the bars is menacing as it makes his hand look really big like a monster's or a god's. The fact that the girl gets her doll back shows that there will be a happy ending. However the fact that the man walks off and is still somewhere in the area sets up a partly unresolved ending. The man's hand on the girl's head represents control and the fascination he has for children. This is quite a powerful image image-like Christ blessing children but the way it is filmed sets up a huge idea of menace. I have used a few techniques from other genres of film, which I have enjoyed and are still effective in creating the effect I want. I am using the halo effect from "Bad Boys" as well as the zoom out from the black jumper of the villain, to create tension and the idea of villainy. From "Silence of the Lambs" I used the beginning idea of a main character in vanishing point so you can barely see them- creating tension and reinforcing the thriller genre. ...read more.

Most of my shots are medium shots which are very commonly used in thriller films, with a few long shots, establishing shots and close-ups. I also used a few point-of-view shots, which are popular in thriller films. A few more subjective shots might have made my film a bit more like the real thing- possibly of the girl from behind the man. However, I do have one subjective shot at the end. Most of my shots are quite static- there is not a lot of movement- which is quite typical of thriller genres. I am not sure if my sequence makes sense- I know what happens but perhaps a few more shots could have been filmed in order to make the action very obvious, which Hollywood likes to do. I would have liked a better location- somewhere which would have made more sense- the girl has no reason to be where she is in the film- I needed a built-up area but I could only find that area with the railings. I would have liked to do a lot with rack-focusing, which is used a lot in Hollywood and is a good technique to make sure the audience is looking in the direction you want them to look, however I do not have the technology to do this. The sound was very difficult to do, as I do not have the technology to compose my own sound track, which I would have liked to do. The incidental music would have emphasised the mood I wanted and increased tension. ...read more.