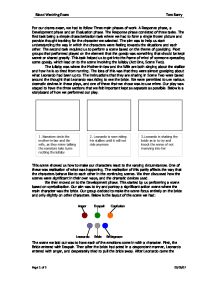 For our drama exam, we had to follow Three main phases of work. A Response phase, a Development phase and an Evaluation phase.

For our drama exam, we had to follow Three main phases of work. A Response phase, a Development phase and an Evaluation phase. The Response phase consisted of three tasks. The first task being a simple characterization task where we had to form a single frozen picture and provide thought tracking for the character we selected. The aim was to help us start understanding the way in which the characters were feeling towards the situations and each other. The second task required us to perform a scene based on the theme of gossiping. Most groups that performed played on the element that the gossip was something that should be kept secret or shared greatly. This task helped us to get into the frame of mind of someone spreading some gossip, which lead on to the scene involving the lullaby (Act One, Scene Two). The lullaby was where the Mother-in-law and the Wife are both singing about the stallion and how he is so tired from running. The idea of this was that they were almost gossiping about what Leonardo had been up to. The insinuations that they are sharing in Scene Two were based around the thought that Leonardo was riding to see the bride. ...read more.

"Leonardo and the bride have many options open to them. Leonardo has his family to be with and his children to look after. Although he appears to not love his wife, he cares that he would be leaving her for the bride. The bride has choices too. She can stay and settle down with the bridegroom that she is marrying, or she can run off with Leonardo. When she is married, such a thing would be to commit adultery and at that time in Spain, marriage was a sacred contract, to be broken only by death. And Death is the price that Leonardo pays for leaving his wife for the Bride." The next phase was Evaluation. We started with a task where we had to use many different dramatic devices to come up with the entire part of a scene. The scene was where Leonardo and the Bride are being hunted through the forest. The groups were given a device to use each. One group was given Thought Tracking, one Frozen pictures, and the last was given free use of all. Our group used Mime and significant action. We used the idea of having the woodcutters walking through a forest and having the actors as the trees. ...read more.

Leonardo: If I had the chance now I would chose her over everything Bridegroom gets out a knife and holds it defensively Bridegroom: We must fight. Bridegroom runs forward in an uneasy manner and plunges the knife into Leonardo's stomach. Leonardo then staggers forward and grabs the knife from the Bridegrooms hand, and in one motion, he stabs the knife deep into the Bridegrooms back. They both fall to the floor, dead. The purpose of this script was for us to try to understand how the characters would react to each other in a devised situation, and how any of their personalities would overcome the situation they were in. It is important to note that the characters in the scene should behave normally. The declamatory manner that is normally portrayed by characters in this situation is completely inappropriate. The characters would behave in a much more emotional manner that reflected their states of mind. The progression from the response phase is notable, and also is the fact that during this progression, a deeper understanding of the actions of the characters has developed. Basic meaning like the fact that everything is caused by something is very greatly applied to this situation, where you have a wide range of emotions from all the characters creating a completely unexpected situation. Blood Wedding Exam Tom Barry Page 1 of 3 02/05/07 ...read more.