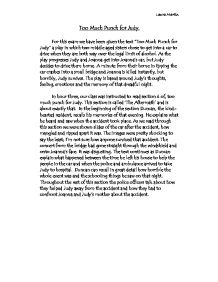 For this exam we have been given the text &quot;Too Much Punch for Judy&quot; a play in which two middle aged sisters chose to get into a car to drive when they are both way over the legal limit of alcohol

Too Much Punch for Judy. For this exam we have been given the text "Too Much Punch for Judy" a play in which two middle aged sisters chose to get into a car to drive when they are both way over the legal limit of alcohol. As the play progresses Judy and Joanna get into Joanna's car, but Judy decides to drive them home. A minute from their home in Epping the car crashes into a small bridge and Joanna is killed instantly, but horribly, Judy survives. The play is based around Judy's thoughts, feeling, emotions and the memory of that dreadful night. In hour three, our class was instructed to read section 4 of, too much punch for Judy. This section is called 'The Aftermath' and is about exactly that. In the beginning of the section Duncan, the kind-hearted resident, recalls his memories of that evening. He explains what he heard and saw when the accident took place. As we read through this section we were shown slides of the car after the accident, how mangled and ripped apart it was. The images were pretty shocking to say the least; I'm not sure how anyone survived that accident. ...read more.

Our final piece. In hours 5 and 6 we were told we had to device a piece of drama about 6-7minutes long, using some of the themes and topics raised in the book, Too Much Punch for Judy. In my group there was, Jack, Selina, Nick and Billy, unfortunately Selina wasn't very well so after the first lesson she was unable to attend the exam sessions. Although it took the boys a little while to get focused and working, we came up with some good ideas. We talked about a number of ideas for quite a long time. Jack thought rein acting part of the play would have given our audience a good insight into how Judy was feeling and what her life has been like since the death of Joanna. I understood where Jack was coming from with his idea, but I didn't see how we could have made the piece our own and formed it into something we would enjoy. After many ideas a suggestions, we settled on the 'depression stages' each of us played a number of characters, to portray to the audience how mixed up and stressed out Judy was. ...read more.

Our brutal and unemotional conversation about our killings lead to Billy jumping from his chair shouting "IT REALLY WAS AN ACCIDENT, AN ACCIDENT I TELL YOU. PLEASE! JUST AN ACCIDENT" in silence myself, Jack and Nick left the room, to leave Billy again standing alone. To close our piece we had to use something reparative and striking, so we decided to use the dialogue that Jack had been reading throughout and adding a small section onto the end. "And in local news today, two Essex teenagers have been killed in an alcohol related accident, the driver, who survived, was said to be 3times over the legal limit, his two passengers sadly died. Our thoughts and greatest sympathy go out to the families of those poor children." To this Billy did not react and the light went out. I think between the 5 of us we created and really striking but abstract piece of drama, I was really happy with the outcome and I think we were able to put across each of our reactions to this particular piece of drama. The play 'Too much punch for Judy' has some striking images and emotions weaved in and I think we managed to portray this in our piece of drama. ?? ?? ?? ?? Laura Martin ...read more.