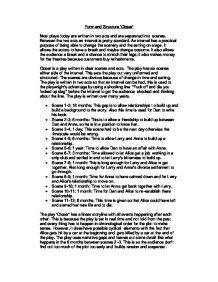 Form and Structure 'Closer' Most plays today are written in two acts and are separated into scenes. Between the two acts an interval is pretty standard. An interval has a practical purpose of being able to change the scenery and the setting on stage. It allows the actors to have a break and maybe change costume. It also allows the audience a break and a chance to stretch their legs; it also makes money for the theatres because customers buy refreshments. Closer is a play written in clear scenes and acts. The play has six scenes either side of the interval. This sets the play out very uniformed and structured. The scenes are obvious because of change in time and setting. The play is written in two acts so that an interval can be had, this is used to the playwright's advantage by using a shocking line "f**k off and die you f****d up slag" before the interval to get the audience shocked and thinking about the line. ...read more.

Also long enough for Larry and Anna's divorce settlement to go through. * Scene 8-9; 1 month: Time for Anna to have calmed down and for Larry and Alice's relationship to move on. * Scene 9-10; 1 month: Time to let Anna get back together with Larry. * Scene 10-11; 1 month: Time for Dan and Alice to re-establish there relationship. * Scene 11-12; 6 months: This time is given so that Alice could have left and started her new life and to die. The play 'Closer' has a linear storyline with all events happening after each other. This is because the play is set in real time and not told from the past and every thing has to happen in chronological order for the plot to make sense. However, it does have possible cyclical elements with the fact that Alice gets hit by a car at the beginning and gets killed by a car at the end of the play. ...read more.

The same reason is given for the reason narrations are not used the play explains itself as it progresses. 'Closer' generally sticks to the traditional structure of Exposition- Rising action- Climax- Denouement. The play does however have what appears to be two structures to it one in the first act rising to climax and then it climbing back to climax again in act two. The structure loosely goes along the lines of the exposition is the couples getting together and establishing links, then the rising action of couples having affairs and breaking up, Climax when the arguments break out between the couples and they all break up, and finally the Denouement is the couples all going their separate ways. Scene eight uses different time zones when Anna is talking to Dan in the present time about her meeting with Larry at lunchtime, and in the other instance we are seeing her meeting with Larry at the same time this is to give the impression of flash backs in time and memory and to keep her movements and actions clear in the audiences heads. Mike Cope ...read more.