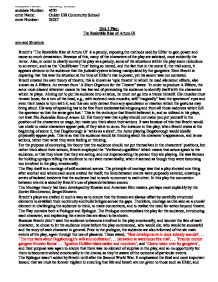 Form and Structure Brecht's 'The Resistible Rise of Arturo Ui' is a parody, exposing the methods used by Hitler to gain power and cause so much devastation. Because of this, many of the characters

Candidate Name: Bethany Weston Candidate Number: 4570 Centre Name: Oulder Hill Community School Centre Number: 33237 Unit 1 Play: The Resistible Rise of Arturo Ui Form and Structure * Brecht's 'The Resistible Rise of Arturo Ui' is a parody, exposing the methods used by Hitler to gain power and cause so much devastation. Because of this, many of the characters of the play are satirised, most evidently the Actor. Also, in order to clearly convey the play as a parody, some of the situations within the play seem ridiculous to an extent, such as the 'Cauliflower Trust' being so named, and the fact that in the scene 8; the trial scene, it appears obvious to the audience that the judicial system is being manipulated by the gangsters. Here Brecht is depicting that this was the situation at the time of Hitler's rise to power, yet his ascent was not contested. * Brecht created his own theory of theatre, this is known as 'epic theatre' in which he used alienation effects, also known as A Effects. An extract from 'A Short Organum for the Theatre" states: 'In order to produce A Effects, the actor must discard whatever means he has learned of persuading the audience to identify itself with the characters which he plays. ...read more.

* The Play contains both a Prologue and Epilogue. The Prologue contextualises the play for the audience, introducing each character, and explaining the events that are about to be shown. * Because Brecht didn't want the audience to become involved in the play emotionally, and wonder the fate of each character, he chose to let the audience know before the play commenced, who would die, who would be successful and the story of each character in general. Prior to the prologue, the audience are also informed of the six main events of the play, again through the use of placards. These stated; 'New developments in dock subsidy scandal'. . . 'The true facts about Dogsborough's will and confession'. . . Sensation at warehouse fire trial'. . . 'Friends murder gangster Ernesto Roma'. . . 'Ignatius Dullfeet blackmailed and murdered', and 'Cicero taken over by gangsters', and their purpose was again to ensure that there was no element of surprise in the play, and so no opportunity for them to become involved emotionally in the drama, as they're aware of the outcome of particular events. * The Epilogue wasn't added by Brecht until after the Second World War. ...read more.

* The Verfremdungseffekte were designed to expose the familiar; Brecht's actors were to present things in their concrete reality so that the audience would be encouraged to think about what had given rise to situation depicted, in this case Hitler's, or Ui's rise to power, and therefore consider ways to change those conditions in the future. * The Resistible Rise of Arturo Ui is divided into 15 scenes, some of which are subdivided into several sections identified by letters. These 15 scenes are then divided almost equally into 2 acts. This symmetry gives the play a degree of continuity, enabling it to flow smoothly. * Scene 8 displays a structure unique from that of other scenes throughout the play. It is the scene in which the innocent 'fish' is on trial for potentially burning down 'Hook's' warehouse. He is being tried before a corrupt judge caused by the manipulation of the judicial system by Ui and his 'underlings'. This scene is divided into seven parts, 'a' to 'g'. Each of these parts is shorter in length than that preceding it, hence quickening the pace of the play and building tension within the scene. The shortening sections also highlight Fish's plunge into a prison sentence, that which he is undeserving of. ...read more.