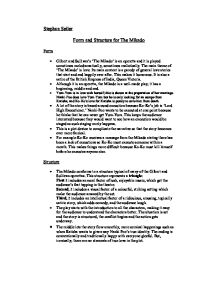 Form and Structure for The Mikado

Stephan Seiler Form and Structure for The Mikado Form * Gilbert and Sullivan's 'The Mikado' is an operetta and it is played sometimes melodramatically, sometimes realistically. The main theme of 'The Mikado' is love. Its main content is a parody of general love stories that start and end happily ever after. This makes it humorous. It is also a satire of the British Empress of India, Queen Victoria. * Although it is an operetta, the Mikado is a well-made play; it has a beginning, middle and end. * Yum-Yum is in love with herself; this is shown at the preparation of her marriage. Nanki-Poo does love Yum-Yum but he is only looking for an escape from Katisha, and Ko-Ko's love for Katisha is purely to save him from death. * A lot of the story is based around execution because Ko-Ko's job is 'Lord High Executioner.' ...read more.

Third, it includes an intellectual factor of a ridiculous, amusing, topically satiric story, which adds comedy, and the audience laugh. * The play starts with the introduction to all the characters, making it easy for the audience to understand the characters better. The situation is set and the story is structured, the conflict begins and the action gets underway. * The middle lets the story flow smoothly, more comical happenings such as when Katisha wants to give away Nanki Poo's true identity. The ending is conventionally and traditionally happy with everyone gleeful. But, ironically, there are no elements of true love in the plot. * Gilbert and Sullivan vary the type of songs to keep the audience entertained. There are solos, duets, trios, madrigals and full cast ensembles. * Solos are used to focus the scene on only one character and how they feel. ...read more.

It does this by stating the words Japan, so the audience know where the play is set. Obviously, the word Titipu gives the location away a little, but if the chorus wear oriental costumes, then the audience have a more in depth description of what Titipu would be like. * The Mikado was written for the Victorian era, and at that time, the English had a high interest in Japan and its culture. So Gilbert and Sullivan add in the culture, as well as make it satirical. * I would make the chorus a mixture of men and women of about 20 people. This is so I could divide the singers into their ability groups e.g. Tenors, Sopranos etc. * Before the start of the play, the overture of orchestral music would be played for a few minutes, this lets the audience get a feel for what they are about to see, and creates suspense. ...read more.