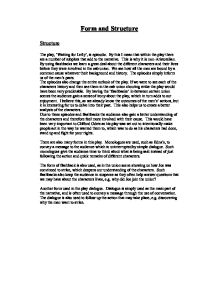 Form and Structure 'Waiting for Lefty', is episodic. By this I mean that within the play there are a number of subplots that add to the narrative. This is why it is non-Aristotelian.

Form and Structure Structure The play, 'Waiting for Lefty', is episodic. By this I mean that within the play there are a number of subplots that add to the narrative. This is why it is non-Aristotelian. By using flashbacks we learn a great deal about the different characters and their lives before they were involved in the cab union. We see how all the men are bound by a common cause whatever their background and history. The episodes simply inform us of the men's pasts. The episodes also change the entire outlook of the play. ...read more.

I believe this, as we already know the outcomes of the men's' actions, but it is interesting for us to delve into their past. This also helps us to create a better analysis of the characters. Due to these episodes and flashbacks the audience also gain a better understanding of the characters and therefore feel more involved with their cause. This would have been very important to Clifford Odets as his play was set out to intentionally make people act in the way he wanted them to, which was to do as his characters had done, stand up and fight for your rights. ...read more.

The form of flashback is also used, as in the union scene showing us how Joe was convinced to strike, which deepens our understanding of the characters. Such flashbacks also keep the audience in suspense as they often help answer questions that we may have about the characters lives, e.g. why did Joe join the union? Another form used in the play dialogue. Dialogue is simply used as the main part of the narrative, and is often used to convey a message through the use of conversation. The dialogue is also used to follow up the action that may take place, e.g. discovering why the men want to strike. ...read more.