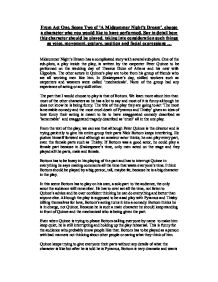 From Act One, Scene Two of 'A Midsummer Night's Dream', choose a character who you would like to have performed. Say in detail how this character should be played, taking into consideration such things as voice, movement, gesture, position and facial expr

From Act One, Scene Two of 'A Midsummer Night's Dream', choose a character who you would like to have performed. Say in detail how this character should be played, taking into consideration such things as voice, movement, gesture, position and facial expressions ... Midsummer Night's Dream has a complicated story with several sub-plots. One of the sub-plots, a play inside the play, is written by the carpenter Peter Quince to be performed on the wedding day of Theseus Duke of Athens and his new wife Hippolyta. The other actors in Quince's play are to be from his group of friends who are all working men like him. In Shakespeare's day, skilled workers such as carpenters and weavers were called 'mechanicals'. None of the group had any experience of acting or any skill either. The part that I would choose to play is that of Bottom. We learn more about him than most of the other characters as he has a lot to say and most of it is funny although he does not know he is being funny. The title of the play they are going to act 'The most lamentable comedy and the most cruel death of Pyramus and Thisby' ...read more.

This is funny for the audience who probably know people like that. Bottom has to be played as a person with bad manners not thinking about other people or caring what they think of him. Quince keeps trying to give everyone their parts without any details of what the character is like but after he is told he is Pyramus, Bottom is very dramatic and wants to know if he is a lover or a tyrant, complete opposites. He doesn't give Quince the chance to tell all the others what part they are playing. When Quince tells him Pyramus is a lover who dies he immediately starts being all romantic like a lover then pretends to cry using his hands on his face to point out the tears running down his cheeks. He should go down on his knees slowly falling to the floor as he plays dead. When he starts acting the part of a tyrant who is meant to be tough and aggressive he must have a sword in his hand and run about pretending to kill the others on the stage. ...read more.

He is very happy to be called handsome and starts posing for the audience in a romantic way. He must stand up to his full height bow to the other actors and then throw kisses to the audience. Instead of letting Quince carry on in his job as director Bottom starts making a fuss about whether he should have a beard and what colour it should be. As he is discussing what colour beard he should have he keeps touching him chin and pulling his hands down to a point to show the shape of a beard. At the end of the scene when Quince gives everyone their lines and tells them when to meet again Bottom is still trying to control the scene by having the last word. He gives everyone a much tougher message than Quince and tries to look a bit threatening and tells everyone to come to the rehearsal or never be seen again. He should be the last one to leave the stage. He believes he is the best actor so he gives a look of annoyance at the other actors and as he leaves the stage he should smile at the audience to show they know he is the best. ...read more.