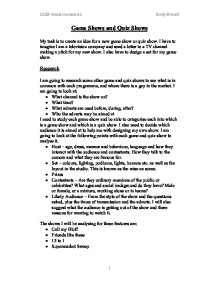 Game Shows and Quiz Shows My task is to create an idea for a new game show or quiz show. I have to imagine I am a television company and send a letter to a TV channel making a pitch for my new show. I also have to design a set for my game show. Research I am going to research some other game and quiz shows to see what is in common with each programme, and where there is a gap in the market. I am going to look at: * What channel is the show on? * What time? * What adverts are used before, during, after? * Who the adverts may be aimed at I need to study each game show and be able to categorise each into which is a game show and which is a quiz show. I also need to decide which audience it is aimed at to help me with designing my own show. I am going to look at the following points with each game and quiz show to analyse it. * Host - age, dress, manner and behaviour, language and how they interact with the audience and contestants. How they talk to the camera and what they are famous for. * Set - colours, lighting, podiums, lights, buzzers etc. as well as the layout in the studio. ...read more.

The guests were members of the normal public, but were of the older generation, about 40+. The music was in an old style, and wasn't very catchy or modern. The set was light blue, green and purple, which is the same as Call My Bluff, which was also in an older style set and layout. This show had adverts in the breaks as it was showed on channel 5. You could tell the show was aimed at an older audience as the adverts included Denture Grip, Over 50s motor insurance, Home base, Credit Cards, Vision Express and Loans. These adverts would not be aimed at young people as they would not be needed or used. This show would appeal to an older audience, and did not appeal to me. I think a new show would have to be more modern than this type of show. The last show I watched to analyse was Supermarket Sweep, which is hosted by Dale Winton. He was dressed in very bright clothes, even though he was wearing a suit. He was very friendly to the contestants, who were general members of the public. He chatted to the contestants for a long period of time, and there was no in set audience. By looking at each of these game shows, I can see that the most interesting show is Friends Like These, and I think there is a gap In the market for an audience of ages 15-30 years old. ...read more.

Then, the team with the highest amount goes on to play more challenges and question rounds. The challenges in the first half consist of the whole team, but the challenges in the second half are only played by one person. If the challenge is completed, the player is safe, but if the challenge is not completed, the player is locked in the game, and cannot come out until the end of the round. Each player can only play once, but there is only enough games for all but one of the players, ensuring one player is in the safe. The safe players are the only players who can play for the holiday, unless the other players are bought out for �100 each. If 3 players are locked in, and only �200 is owned, then the free player has to choose which player/players do not go. The money collected will be shared out at the end of the game between the remaining players, unless all money has been used to buy out locked players. Even if all the money has been spent to unlock all the players, the holiday may not still be won, as a game has to be played and won before the holiday is won. I think my game show will be successful because there are no other games like this on the market at the moment and there is room for this kind of show on the TV. ?? ?? ?? ?? GCSE Media Coursework Emily Shimell 1 ...read more.