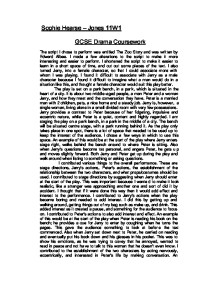 GCSE Drama Coursework - The script I chose to perform was entitled The Zoo Story and was written by Edward Albee.

Sophie Hearse - Jones 11W1 GCSE Drama Coursework The script I chose to perform was entitled The Zoo Story and was written by Edward Albee. I made a few alterations to the script to make it more interesting and easier to perform. I shortened the script to make it easier to learn in a short space of time, and cut out some pieces of the text. I also turned Jerry, into a female character, so that I could associate more with whom I was playing. I found it difficult to associate with Jerry as a male character because I found it difficult to imagine what a man would do in a situation like this, and thought a female character would suit this play better. The play is set on a park bench, in a park, which is situated in the heart of a city. It is about two middle-aged people, a man Peter and a woman Jerry, and how they meet and the conversation they have. Peter is a married man with 2 children, pets, a nice home and a steady job. Jerry is, however, a single woman, living alone in a small divided room with very few possessions. ...read more.

I contributed to what props and costumes should be worn and used. I thought that it would be best if Peter wore a jacket and shirt to show that he was older and perhaps had more responsibility, like a well-paid job. I thought that Jerry should have things like make up and a mirror in her bag, so that some of her eccentricity would show through her fidgeting. I encountered a few problems when performing this play. One of which was adapting the script to make it suitable for a female character. It was a problem because it had been written as a male part, and the things that a man would do are different to what a woman would do. I solved this problem by reading the script through the eyes of an eccentric woman, imagining that I had a tiny room, and few possessions. Also I found it difficult to establish a relationship at the beginning of the play, as I knew the actor I was working with already when I had to act as if I had never seen him before in my life. I solved this by trying my best to blank out everything I knew of him, so I could act out the role better. Another problem was the use of pauses. ...read more.

An example of this would be when Jerry is listing her possessions. As she tells Peter about each one, she notes how many on her fingers. If she had her hands in her lap then she would be fiddling with them. She would stand, sit, and fiddle with her hands because she is an eccentric character and likes to fidget. Jerry's gait would be quickly with small steps. This would be because she is an eccentric character. She fidgets a lot, and this makes the audience think that she perhaps has something on her mind that she is too nervous, or afraid of what Peter will say if she says it. Her facial expressions differ throughout the play, from being quite annoyed at the lack of attention Peter pays her at the beginning, but then as the play progresses, she becomes more and more inquisitive because of her wanting to know more about Peter and how jealous she is of his life. Jerry's props are a bag containing a mirror, lipstick and a drink. This is because she's quite fidgety and needs something to do with hands other than fiddle with them. She is dressed in a skirt, top and jacket to make her appear normal. ...read more.