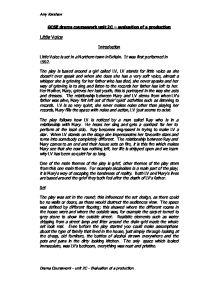 GCSE drama coursework unit 2C - evaluation of a production Little Voice Introduction Little Voice is set in a Northern town in Britain. It was first performed in 1992. The play is based around a girl called LV, LV stands for little voice as she doesn't ever speak and when she does she has a very soft voice, almost a whisper she is grieving for her father who has died, she never speaks and her way of grieving is to sing and listen to the records her father has left to her. Her Mother, Mary, grieves her lost youth, this is portrayed in the way she acts and dresses. The relationship between Mary and LV stems from when LV's father was alive, Mary felt left out of their 'quiet' activities such as listening to records. LV is so very quiet, she never makes noise other than playing her records, Mary fills the space with noise and action, LV just seems to exist. The play follows how LV is noticed by a man called Ray who is in a relationship with Mary. He hears her sing and gets a contract for her to perform at the local club. Ray becomes engrossed in trying to make LV a star. When LV stands on the stage she impersonates her favourite stars and turns into somebody completely different. The relationship between Ray and Mary comes to an end and their house sets on fire, it is this fire which makes Mary see that she now has nothing left, her life is stripped open and we learn why LV has been so quiet for so long. ...read more.

The clothes hid her femininity and ensured she wasn't noticed. In contrast to this, when LV sung, she wore glamorous dresses, in bright colours such as a long red dress she wore which sparkled. This was a dress she would be noticed in, she had a hair piece and looked like a star. When she gets home she then puts on her pyjamas, again they are the same colour as the bed sheets meaning she just seems to disappear again. Sadie's costume was always uncoordinated and she always looked scruffy and not very presentable. She wore socks with open sandals and wore mis matching colours. These all portrayed her character as somebody who doesn't take a lot of pride in her appearance. Her socks have holes in them and her clothes are too small for her, this also shows her character doesn't have a lot of money. When Sadie does dress up to go to the club, she wears again mismatching clothes and wears sandals with socks. This contrasts to the appearance of Mary when they both go to the club. Lighting/special effects Lighting was used in some parts to help show the reality of the set, such as the street light and the light through the windows and the door. Lights were used in the club and gave a really good effect. Coloured fairy lights lined the bar signs around the set. Disco b***s rotated around giving a show of, light as LV was singing. ...read more.

Key Moments At the very end of the play when Billy takes LV up in the mechanical lift, she is singing and sparkles are falling from the sky. Billy kisses LV on the forehead, this is the moment when we see that it is a very innocent relationship that they hold with each other and it is more of a caring friendship. It is a beautiful moment when LV seems like at last she is at peace with herself and has finally let somebody get close to her. The moment when LV told her Mother why she was so quiet was very significant as we finally heard what LV was really feeling; she emptied her mind of everything. She told of how she never spoke as she 'couldn't get a word in'. We then realise how throughout the play Mary has filled the space with noise and movement, there had been no room for LV. Conclusion I thought the play was excellent and communicated the story of Little voice really effectively. I felt I could relate to the down to earth approach and the depth of the characters. I thought that the way LV sung in each scene meant that the scenes were broken up and so made more effective. The story didn't drag on at all and so it ended while I was still enjoying it. All of the techniques and effects that were used made the play 'Little Voice' was performed in a really effective way and I thoroughly enjoyed it. Amy Kershaw Drama Coursework - unit 2C - Evaluation of a production ...read more.