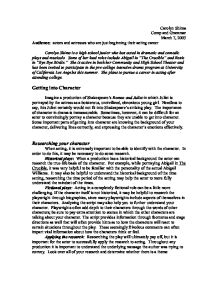 Carolyn Shima Comp and Grammar March 7, 2003 Audience: actors and actresses who are just beginning their acting career Carolyn Shima is a high school junior who has acted in dramatic and comedic plays and musicals. Some of her lead roles include Abigail in "The Crucible" and Rosie in "Bye Bye Birdie." She is active in both her Community and High School Theater and has been invited to participate in the pre-college intensive drama program at University of California Los Angeles this summer. She plans to pursue a career in acting after attending college. Getting into Character Imagine a production of Shakespeare's Romeo and Juliet in which Juliet is portrayed by the actress as a boisterous, uncivilized, obnoxious young girl. Needless to say, this Juliet certainly would not fit into Shakespeare's striking play. The importance of character in drama is immeasurable. Sometimes, however, it can be difficult for an actor to convincingly portray a character because they are unable to get into character. Some important parts of getting into character are knowing the background of your character, delivering lines correctly, and expressing the character's emotions effectively. Researching your character When acting, it is extremely important to be able to identify with the character. In order to do this, it may be necessary to do some research. Historical plays: When a production has a historical background the actor can research the true-life basis of the character. ...read more.

Obviously, the first part of delivering lines is to memorize all of the lines. Many professors feel an actor should memorize the lines and then forget them. This means that the actor should know the lines, but when on stage, it should not seem as though there is a script. In other words react to the other actors on stage as if the they have said this for the first time. Energizing the performance: Every actor should understand the need for energy in a show and also where to find that energy. The most obvious place to look for energy is the audience. Feeling the energy of the crowd will help the actor to "get pumped;" if the audience is enjoying themselves, than their energy should help the actor to enjoy his or her self on stage. To feel the energy of the crowd, an actor must learn to let their guard down. Many new actors will have the tendency to "shut down" and try to make the audience disappear in his or her mind, but this will most certainly detract from their performance. When performing in a production with multiple performances, it is usually very apparent which show had the most interactive audience because the energy of the audience directly affects the energy of the actors. As long as the actors allow themselves to hear the laughter, to see the smiles, and to feel the emotions of the crowd this rule will always apply. ...read more.

Making the magic: While acting, never forget that acting is all about the audience. Without the audience there would be no reason to act. So, be sure to always keep in mind that the audience has a different perspective of things. They have never seen the practices or the scripts, to them, each play should seem completely real. In a real world setting, emotions and words flow from people uncontrollably. An actor must learn to create this feeling on stage. When another character speaks, the actor should respond first with emotion and then with the necessary line. In real life, emotion is always a person's first reaction to a stimulus, then, either action or words may follow. An actor should constantly be feeling things while on stage. It may help in expressing this continuous emotion to get into character at least two minutes before going on stage and two minutes after leaving the stage. This way, the emotions will feel more natural not only to the actor, but to the audience. Growth of character: In every play, just as in life, the characters will grow with time. It is important to grasp the changes in character that must occur from scene to scene. Identifying the message of the play (which was discussed earlier) will help the actor to determine how the character should grow throughout the play. Pick out key events in the character's "life" and determine how a real person would be changed from these events. The character should change according to the maturity and experiences or the character. ...read more.