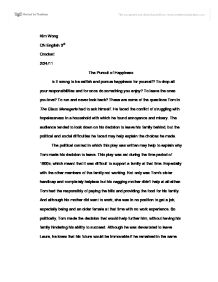 Kim Wong CN English 3rd Crockett 2/24/11 The Pursuit of Happiness Is it wrong to be selfish and pursue happiness for yourself? To drop all your responsibilities and for once do something you enjoy? To leave the ones you love? To run and never look back? These are some of the questions Tom in The Glass Menagerie had to ask himself. He faced the conflict of struggling with hopelessness in a household with which he found annoyance and misery. The audience tended to look down on his decision to leave his family behind, but the political and social difficulties he faced may help explain the choices he made. The political context in which this play was written may help to explain why Tom made his decision to leave. ...read more.

So politically, Tom made the decision that would help further him, without having his family hindering his ability to succeed. Although he was devastated to leave Laura, he knew that his future would be immovable if he remained in the same household or town as his mother. In the end, Tom was just looking out for himself, just like his father. In the social context, the reason for Tom leaving can be explained because Tom was living in despair. He often dreamt of escaping the Wingfield household to seek better opportunities, and finds himself unhappy with his job, often going to the movies to hide from reality. It was also evident that Tom didn't have a good relationship with his mother. ...read more.

His eagerness to leave town is further pushed by Jim, when he offers him ideas of better job opportunities. And with his unfulfilling social life it is easy to appreciate why he was obligated to leave. Tom didn't want to grow old with his mother and sister, thinking about what could've been. He took the risk and took control of his own life. Seeing Tom's social and political viewpoint makes it hard for the audience to opinionate Tom as heartless and cruel for deserting him mother and sister. In fact, they might just question themselves, "if I was in Tom's situation, would I have left too?" There are many different ways Tom could've approached his family situation. He didn't have to leave. But the frustration in his life makes it easy for people to see why he did. ...read more.