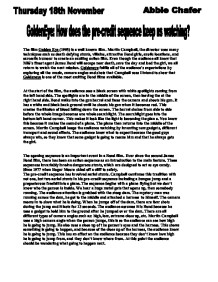 Goldeneye: how does the pre-credit sequence keep us watching?

The film Golden Eye (1995) is a well known film. Martin Campbell, the director uses many techniques such as death defying stunts, villains, attractive Bond girls, exotic locations, and sarcastic humour to create an exciting action film. Even though the audience all know that MI6's finest agent James Bond will escape near death, save the day and bed the girl, we all return to watch the next mission. Goldeneye fulfils all of the audience's expectations by exploring all the music, camera angles and shots that Campbell uses I intend to show that Goldeneye is one of the most exciting Bond films available. At the start of the film, the audience sees a black screen with white spotlights coming from the left hand side. The spotlights are in the middle of the screen, then leaving the at the right hand side. Bond walks into the gun barrel and faces the camera and shoots his gun. It has a white and black back ground until he shoots his gun when it becomes red. This creates the illusion of blood falling down the screen. The barrel shakes from side to side before the whole image becomes one whole searchlight. ...read more.

He also uses a close up of the person's eyes and the harness. This shows something is going to happen, and because of the close up of the harness, the audience know he is going to jump. This has an effect on the audience because they don't know how high he is going to jump from, and they don't know where from. At this point the audience should be wondering what going to happen next. Bond breaks into the weapons facility before descending from the air vent of a toilet and knocking a guard out. He cracks a joke "beg your pardon, I forgot to knock" to keep the audience watching and carries on as nothing has actually happened. We then see a different man come on the screen holding a gun to the other man's head. The man holding the gun says "you're late". The audience are confused with what is going on but they realise that it is 006 and 007. They go into the weapons base, and Bond sets a b**b to go of in the next six minutes. They go to get out but there is an alarm that goes off so they have to find an exit. ...read more.

Bond escaping from the Russians grabs the audience's attention. He knocks someone off a motorbike and chases after the plane, he gets back in the plane but it falls of a cliff. Martin Campbell uses a close up off Bonds eyes and the joystick. He does this so you can see the pressure that is on Bond and how hard it is to move the joystick. Bond manages to move the joy stick before the plane crashes. The audience is relieved that Bond has escaped once again from a tricky situation. Martin Campbell uses a high camera angle so we can see how steep the cliff is and uses a low one so we can see the plane coming down. The director keeps us watching by building our tension up and then dropping it. Conclusion The pre-credit sequence is a really exciting part of the film. I think it is a really successful and it makes the audience want to carry on watching the rest of the film. Martin Campbell is a great director for the James Bond films. Goldeneye is one of the most popular films that he has directed. This film builds up your tension and then drops it, just like a rollercoaster. Pierce Brosnan plays James Bond in this film, I think he suits this part very well. ...read more.