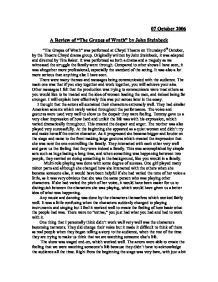 07 October 2006 A Review of "The Grapes of Wrath" by John Steinbeck "The Grapes of Wrath" was performed at Clwyd Theatre on Thursday 6th October, by the Theatre Clwyd drama group. Originally written by John Steinbeck, it was adapted and directed by Tim Baker. It was performed as both a drama and a tragedy as we witnessed the struggle the family went through. Compared to other shows I have seen, it was altogether more professional, especially the standard of the acting. It was also a lot more serious than anything else I have seen. There were many themes and messages being communicated with the audience. The main one was that if you stay together and work together, you will achieve your aim. Other messages I felt that the production was trying to communicate were treat others as you would like to be treated and the idea of women leading the men, and indeed being far stronger. I will explain how effectively this was put across later in the essay. I thought that the actors all sustained their characters extremely well. They had similar American accents which rarely varied throughout the performance. The voice and gestures were used very well to show us the despair they were feeling. Tommy gave us a very clear impression of how hard and unfair the life was with his expression, which varied dramatically throughout. ...read more.

Right from the beginning the stage was very bare, with just a bit of dirty straw scattered around. This showed how poor and basic the people were. It also created a rural feel. They used images on the back wall to show us where they were. The house image was not big enough, it seemed to be just there but not really doing anything. The barbed wire used for when they were in different camps worked fairly well as it communicated that they were trapped in the way of life. However, I think it should have been taken away for the dancing scenes, as I think that was a much more light heated moment that showed the people still having some fun. Despite the separate images for Oklahoma and California, there was not enough contrast between the sets for the two places. California was meant to be a harder place to live in, but in reality, the only difference was the dust effect in Oklahoma and the rain in California. Although both worked well on their own, it didn't create enough contrast. Also the carriages used in the flood scene blocked the audiences view so we could not see what was happening inside. The grave for Grandad worked extremely well. It was very simple, as it would have been if he had died under those circumstances in real life. It gave the feeling that they really didn't have any money. ...read more.

When Grandad died, Grandma fell sick; she needed his support to live. Also when the family was arguing, the atmosphere was tenser which showed they needed to be united. The idea of women being stronger in difficult times was also put across very well. At the beginning, the mother checked nearly everything with the father and he would often interrupt her. However, as the level of difficulty they were facing increased, the mother became more forthright and was the one telling the others what to do. We were shown the father breaking down and losing control, once again it was the mother there to comfort him. At the very end, it is a man we were shown starving, while another man was unsuccessfully looking after him. Once again it was the women who saved him, with the mother having the idea that the eldest daughter, Rose of Sharon, could breastfeed him to save his life. Again this is women looking after men, not the other way round. Generally, The Grapes of Wrath is a very moving show. It communicated all the themes very well and the other effects were good. I think it was quite a hard play to direct so that it would work for the audience, and therefore some of the ideas did not work overly well. However, I think it was an excellent performance that really gave you something to think about. By Rebecca Britton ...read more.