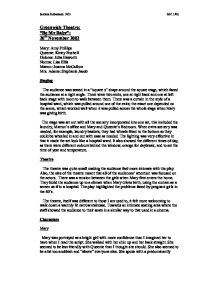 Greenwich Theatre: "Be My Baby": 20th November 2002 Mary: Amy Phillips Queenie: Kirsty Bushell Dolores: Julia Haworth Norma: Lisa Ellis Matron: Joanna McCallum Mrs. Adams: Stephanie Jacob Staging The audience was seated in a "square u" shape around the square stage, which faced the audience at a right angle. There were two exits, one at right back and one at left back stage with room to walk between them. There was a curtain in the style of a hospital ward, which was pulled around one of the exits; the exact one depended on the scene, which worked well when it was pulled across the whole stage when Mary was giving birth. The stage was set out with all the scenery incorporated into one set, this included the laundry, Matron's office and Mary and Queenie's Bedroom. When extra scenery was needed, for example, laundry baskets, they had wheels fixed to the bottom so they could be wheeled in and out with ease as needed. ...read more.

Queenie Queenie seemed less compassionate than I thought her to be. She seemed very argumentative and harsh. I didn't see a "softer" side to her personality that I feel she should have. She walked with her collar up and her head down. She didn't despise Matron as much as I thought she would and seemed to be the leader of the group. She spoke with a rough northern accent and seemed less confident than I pictured her to be. If Queenie was an animal, she would be a snake because she is nasty but can be tamed and she can relate to the colours of exotic snakes as Mary says she wears her pregnancy like war paint. Dolores Dolores spoke in a high pitched voice while behaving in a childish and na�ve manner. When I first saw her, I thought she was too young to be a good actress but as she began to act I, like many others in the audience, was proved wrong. ...read more.

Also, if Mary was seven months pregnant, her father would've noticed so she would dress in baggy clothes or clothes that were too big for her, however, she entered the home wearing a fairly tight skirt and jacket set. The play highlights the problems and flaws in 1960's society, what pregnant girls had to go through and their feelings. They used the stereotypical northern teenager and divided it into four, adding feelings and history. Setting the play in northern England, using northern accents makes the girls sound "backwards" and poor. Audience Reactions The audience laughed mainly at Dolores. Norma made the audience nervous and made them pity her. Mary made the audience feel as if they could relate to her. Queenie was the leader of the girls, and so led the audience into the home and into the other girls' lives. Matron made the audience look up to her, as she was responsible for running the home. Mrs. Adams made the audience feel sorry for her to have to give up her own daughter, but at the same time hated for being so obsessed by her status and what others would think of her. Jemma Robertson 10D 26/11/02 ...read more.