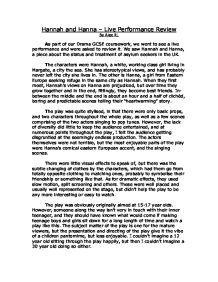 Hannah and Hanna - Live Performance Review By Alex RL As part of our Drama GCSE coursework, we went to see a live performance and were asked to review it. We saw Hannah and Hanna, a piece about the status and treatment of asylum seekers in the UK. The characters were Hannah, a white, working class girl living in Margate, a city the sea. She has stereotypical views, and has probably never left the city she lives in. The other is Hanna, a girl from Eastern Europe seeking refuge in the same city as Hannah. When they first meet, Hannah's views on Hanna are prejudiced, but over time they grow together and in the end, fittingly, they become best friends. ...read more.

The actors themselves were not terrible, but the most enjoyable parts of the play were Hanna's comical eastern European accent, and the singing scenes. There were little visual effects to speak of, but there was the subtle changing of clothes by the characters, which had them go from totally opposite clothing to matching ones, probably to symbolise their friendship or something like that. As for dramatic effects, they used slow motion, split screening and others. These were well placed and usually well represented on the stage, but didn't help the play to be any more interesting or easy to watch. The play was obviously originally aimed at 15-17 year olds. ...read more.

By the end, the plot is stretched so thin that you wander what can happen next. Then, it gets even worse, with a stupidly stupid ending that just about finishes the audience's patience, and the end was a sigh of relief for all involved. To round up, I would say that this piece requires a lot of work. It's a tad jumbled, and I don't think the director really knew what he wanted out of the play. It was a burden to sit through the play without nothing better to do, as should have been predicted from a teenage audience. With a few more characters, enjoyable scenes and no more accents, the play could be a minor success. However, at this point in time I don't see it becoming anything more then an educational GCSE play. Alex RL ...read more.