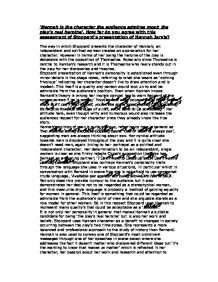 'Hannah is the character the audience admires most: the play's real heroine' - How far do you agree with this assessment of Stoppard's presentation of Hannah Jarvis?

'Hannah is the character the audience admires most: the play's real heroine'. How far do you agree with this assessment of Stoppard's presentation of Hannah Jarvis? The way in which Stoppard presents the character of Hannah; an independent and spirited women creates an appreciation for her character. However in terms of her being the heroine of the play is debatable with the opposition of Thomasina. Especially since Thomasina is central to Hannah's research and it is Thomasina who really stands out in the play for her discoveries and theories. Stoppard presentation of Hannah's personality is established even through minor details in the stage notes, referring to what she wears as 'nothing frivolous' indicating her character doesn't like to draw attention and is modest. This itself is a quality any person would look up to and be admirable from the audience's position. Even when Hannah knows Bernard's theory is wrong her morals compel her to warn Bernard of the consequences if he is wrong;' You deserve what you get and I think you're mad. But I can't help myself, you're like some exasperating child pedalling its tricycle towards the edge of a cliff, and I have to do something'. ...read more.

This itself is something that could be regarded as admirable from the audience's point of view and she arguable stands as a role model for other women. So in this respect Stoppard uses Hannah to represent many quality's that could be acceptable as a 'heroine'. It is not only her personality in general that makes Hannah a suitable candidate for being 'the play's real heroine' but is also her work and beliefs. Stoppard uses Hannah character as a benefit to changes in society occurring between the play's two time zones. She represents a more balanced and professional approach to the study of history than Bernard. Hannah is also used to convey one of Stoppard's most prominent messages through one of her speeches in scene seven where she addresses the fact it doesn't matter who discovered different ideas but 'it's the wanting to know that makes us matter' which is reflected in her character, her passion about her work and research and attention to detail. Even though this issue was raised in the earlier time period it lacks in the 20th century period of the play which is likely to gain more approval from the audience and make her opinions more valued to the whole of the play. ...read more.

She is extremely intelligent both academically and in general. Often it appears she gets the better of her tutor, Septimus 'There is no proof, Septimus. 'The thing that is perfectly obvious is that the note in the margin was a joke to make you all mad', introducing a comical aspect to the play. However Hannah does not lack humour in the sense she can be sarcastic at times and witty, she asks Chloe in scene two 'aren't you supposed to have a pony?' providing an underlying joke, because it is thought girls have ponies instead of s*x. Therefore in conclusion I believe that the character of Hannah that Stoppard created is admirable in many ways and she could be considered a heroine in the play. However Thomasina is equally if not more suited to this idea of a 'real heroine' to the play because of not only the ideas she brings to the play but her age and lively personality. She is central to Hannah's research and of the ideas brought into the later time period such as determinism. Perhaps is would be more appropriate to regard Thomasina as the 19th century heroine and Hannah the 20th century heroine. ...read more.