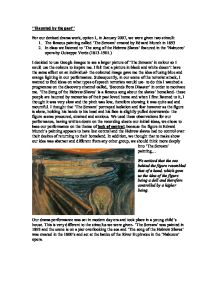 Haunted by the past

''Haunted by the past'' For our devised drama work, option 1, in January 2007, we were given two stimuli: 1. The famous painting called 'The Scream' created by Edvard Munch in 1893 2. In class we listened to 'The song of the Hebrew Slaves' featured in the 'Nabucco' opera by Guiseppe Verde (1813-1901.) I decided to use Google images to see a larger picture of 'The Scream' in colour so I could use the colours to inspire me. I felt that a picture in black and white doesn't have the same affect on an individual- the coloured image gave me the idea of using blue and orange lighting in our performance. Subsequently, in our scene of the terrorist attack, I wanted to find ideas on what types of speech terrorists would use- to do this I watched a programme on the discovery channel called, 'Seconds from Disaster' in order to motivate me. ...read more.

In addition, we thought that to make show our idea was abstract and different from any other group, we should think more deeply into 'The Scream' painting... We noticed that the sea behind the figure resembled that of a hand, which gave us the idea of the figure being a doll and therefore controlled by a higher being. Our drama performance was set in modern day era and took place in a young child's house. This is very different to the stimulus we were given- 'The Scream' was painted in 1893 and the scene is on a pier overlooking the sea and 'The song of the Hebrew Slaves' was created in the 1800's and set at the banks of the River Euphrates in the 'Nabucco' opera. ...read more.

In addition, the music displayed haunting memories and although these memories were happy and in our performance the memory of her feuding parents was a sad one, the similarity is that these obsessive memories are continuous and can not be stopped- uncontrollable. My piece of drama work shows the large amount of failing marriages in today's society and represents the amount of suffering existing- terrorist attacks, domestic violence etc. I feel the music does not show this however, because I would have imagined it would be faster and sound angrier. On the other hand, it does explain the helplessness and upset felt by many individuals, such as those enduring spouse beaters in my opinion. 'The scream' portrays the more aggressive and desperate side of emotions, such as the scene in our performance when 'the man' holds the woman's hand in the frying pan and verbally abuses her. ...read more.