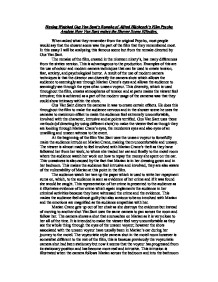 Having Watched Gus Van Sant's Remake of Alfred Hitchcock's Film Psycho Analyse How Van Sant makes the Shower Scene Effective. When asked what they remember from the original Psycho, most people would say that the shower scene was the part of the film that they remembered most. In this essay I will be analysing this famous scene but from the remake directed by Gus Van Sant. The remake of the film, created in the nineteen ninety's, has many differences from the sixties version. This is advantageous to the production. Examples of this are the use of colour and modern camera techniques that can be used to create tension, fear, anxiety, and psychological horror. A result of the use of modern camera techniques is that the director can diversify the camera shots which allows the audience to seemingly see through Marian Crane's eyes and allows the audience to seemingly see through the eyes of an unseen voyeur. This diversity, which is used throughout the film, creates atmospheres of tension and at parts makes the viewer feel intrusive; this is achieved as a part of the modern usage of the cameras was that they could show intimacy within the shots. Gus Van Sant directs the cameras in was to create certain effects. He does this throughout the film to make the audience nervous and in the shower scene he uses the cameras to maximum effect to make the audience feel extremely uncomfortable, involved with the character, intrusive and at points terrified. ...read more.

From the point Marian turns the shower on, the camera keeps changing shots from the shower head down to the naked body and seemingly from Marian up to the shower head. These shots alternate and the individual shots last for a shorter and shorter period of time which creates tension and suspense. After a few seconds of this the viewer sees a shot of the translucent shower curtain and this gives the viewer the advantage of visual irony over Marian because they see a dark figure in the room. This advantage makes the suspense grow and tension mount as our relationship gained throughout the film with Marian has involved the viewer with her and so our concern is greater than if we had no relationship at all. The figure eventually reaches the curtain and aggressively pulls it back and at this moment Van Sant uses the camera to portray an image of horror and desperate need as he shows a close up of Marian's face which reflects a mood of terror. Following their shock at what has just happened the viewer becomes more terrified as the dark figure begins to continually stab Marian in her most vulnerable state. A motif is created within the scene at this point as the viewer has seen contrast occur, both with the bright bathroom against the dark hotel room and also the dark figure contrasted against the bright bathroom. The motif continues in the scene with the contrast of the dark knife against the white of Marian's skin. ...read more.

Throughout the film Gus Van Sant has made the shower scene effective by using a range of camera shots. These include long pan shots, short quick shots or long close ups to create many moods and atmospheres which can make what is happening visually seem more real and dramatic. As well as good camera techniques Van Sant has made the scene effective by linking frames with appropriate sounds such as ambient sounds like the rain with resulted in brilliant effect. Also a solitary mood was created as well as an anxious and horrific atmosphere by orchestral sounds which had equal effect but they illustrated frenzied panic. An amazing composition with good harmony between sounds and images has really made this scene effective which is why the scene is so widely known. While writing this essay I had the benefit of seeing the whole film. If this section of the film was seen in isolation I believe that certain motifs wouldn't have been so apparent. An example of this is that the audience would not have been as comfortable with the scene if they had viewed it in isolation as they would not have seen the parts of the film that contained s****l images. It would have been the first time that the viewer would have seen the intense and indeed intrusive camera shots; whereas when the scene is viewed in context with the rest of the film the camera shots are not new. All these reasons I believe add to the scenes excellence whether seen in or out of context with the rest of the film. ...read more.