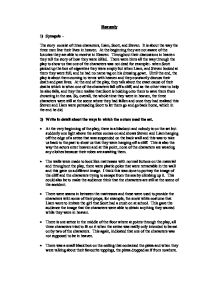 Heavenly - Write in detail about the ways in which the actors used the set.

Heavenly 1) Synopsis - The story consist of three characters, Liam, Scott, and Steven. It is about the way the three men live their lives in heaven. At the beginning they are not aware of the luxuries they are able to receive in Heaven. Throughout their discussions in heaven they tell the story of how they were killed. There were hints all the way through the play to show us that one of the characters was not dead for example:- when Scott picked up the box of cigarettes they were empty but when Liam, and Steven looked at them they were full, and he had no name tag on his dressing gown. Until the end, the play is about them coming to terms with heaven and they constantly discuss their death and past lives. At the end of the play, they talk about the exact cause of their deaths which is when one of the characters fall off a cliff, and as the other tries to help he also falls, and they then realize that Scott is holding onto them to save them from drowning in the sea. So, overall, the whole time they were in heaven, the three characters were still at the scene where they had fallen and once they had realized this Steven and Liam were persuading Scott to let them go and go back home, which in the end he did. ...read more.

3) As a member of the audience, I think I responded to the play really well. I was constantly thinking about what was going on in the play and trying to figure out reasons why some of the things happened when they did. I found this play very funny but also some parts shocked me and made me feel sad. I felt sad at the end when Steven and Liam told Scott he had to let go and return to normal life. Throughout the play, the characters use a lot of choreographic movements which are done in slow motion to help tell the story. While this is happening, Liam is telling the story out loud and I think both of these things are done to make you think hard about what is really happening and to get you involved in the story line. At one point, Steven had a cap gun that he kept firing and this made the audience jump because the first time, the shot was incorporated in the music but then he shot the gun and it made a very loud bang. Steven then held the gun in the face of Scott and it kept the audience wondering if he was actually going to fire it. He was doing this because he was telling the story of killing all baby's who would grow up like Hitler because he wants to do something good if he is ever able to return back to normal life. ...read more.

This was made to look like water to show the original scene where they were drowning. A subtle blue light was used at the end to show the coldness of the scene, this light and dry ice made the audience feel involved and part of that scene, with some sad feelings. There was also pre-recorded music of the sea also to get us, the audience, into the mood of things. Scott, was then sat on the settee fully dressed in his original clothes looking sad, and emotional as if he was about to leave. * The next image was when the three characters had climbed up the wall and were doing a choreographical routine on the settee suspended on the wall. This settee was made to look like it was a mirror image of the settee on the floor which was a good theatrical image. This means that everything is being reversed, such as gravity. In this scene, the characters were doing choreographical movements with their legs which was very effective yet I thought it was unnecessary and pointless, as it was not really anything to do with the story. Their legs were being crossed and waved around like a dance and it was very in time with the music. They had obviously practiced this a lot as it was done perfectly. Overall, I really enjoyed the play and thought it was very funny. The actors were very good and I thought they portrayed the story really well. ...read more.