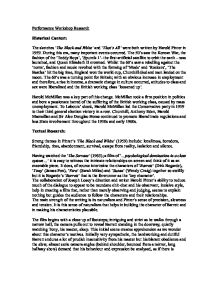 Performance Workshop Research Historical Context: The sketches 'The Black and White' and 'That's All' were both written by Harold Pinter in 1959. During this era, many important events occurred. The 50's saw the Korean War, the fashion of the 'Teddy Boys', 'Sputnik 1'- the first artificial satellite to orbit the earth - was launched, and Queen Elizabeth II crowned. Whilst the 60's saw a rebelling against the 'norm', fashion and music revolted with the forming of 'Mods' and 'Rockers', 'The Beatles' hit the big time, England won the world cup, Churchill died and men landed on the moon. The 60's was a turning point for Britain; with an obvious increase in employment and therefore, a rise in income, a dramatic change in culture occurred, attitudes to class and s*x were liberalized and the British working class 'loosened up'. Harold McMillan was a key part of this change. McMillan took a firm position in politics and bore a passionate hatred of the suffering of the British working class, caused by mass unemployment. ...read more.

The main strength of the writing is its naturalism and Pinter's sense of precision, slowness and tension. It is this sense of naturalism that helps in building the character of Barrett and in making his characteristics plausible. The film begins with a close up of footsteps; intriguing and strict as he walks through a narrow hall, the camera pulls out to reveal Barrett standing in the doorway, quietly watching Tony, his master, sleep. This initial scene creates apprehension as we wonder about this character's motives. Initially very sympathetic, the hardworking and dutiful Barrett endures a lot of prudish insensitivity from his master but his blatant obedience and the slow, almost eerie camera angles (behind shoulder, bounced from a mirror, long hallway shots) demand that his behaviour and expression be analysed, as if there is something lurking behind his reverence and humility. The breakdown of Tony, who began the film as a high-class, dominant figure, and ends as a pathetic, lethargic alcoholic, is the work of Barrett, and the turning of the status tables is also Barrett's doing. ...read more.

The house plays such a key part in the film; the four walls trapping the tension of the characters, and its deafening silence and dimly lit rooms working alongside Barrett's games, almost like a menacing prison with the dead flowers and warped reflections from the convex mirrors foreshadowing the warped reality and lack of life Barrett has in store for Tony. James Leahy states in 'The Cinema of Joseph Losey': '...the house in which the drama is acted out grows into a womb-like prison in which Tony and Barrett, master and servant, boss and worker, and, at times h********l couple, husband and wife, son and mother even, are bound inseparably together by bonds of knowledge, hate, guilt and love from which Tony no longer has the strength of will to escape...' This statement supports Barrett's motives and as we watch him send Vera to seduce Tony with her innocent looks and childlike voice, the 'man servant' hangs from his bed, a cigarette protruding from his lips with a stern glare in the knowledge that, unbeknownst to others, they are his servants and he is in complete control. ...read more.