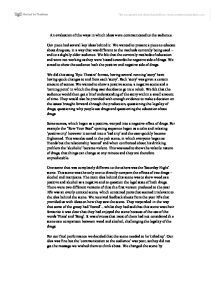 How acting techniques or design elements and the use of dramatic form were consciously employed to achieve the intended effect.

An evaluation of the ways in which ideas were communicated to the audience. Our piece had several key ideas behind it. We wanted to present a piece to educate about drug use, in a way that was different to the methods currently being used - and to a slightly older audience. We felt that the currently methods of education and were not working as they were biased towards the negative side of drugs. We aimed to show the audience both the positive and negative side of drugs. We did this using 'Epic Theatre' format, having several running 'story' have having quick changes to and from each 'story'. Each 'story' was given a certain amount of scenes. We wanted to show a positive scene, a negative scene and a 'turning point' in which the drug user decides to go into rehab. We felt that the audience would then get a brief understanding of the story within a small amount of time. ...read more.

There were two different versions of this; the first version produced to the year 10's was an overly comical scene, which contained parts that seemed irrelevant to the idea behind the scene. We received feedback sheets from the year 10's that provided us with ideas on how they saw the scene. They responded in the way that some of the group had 'feared'...whilst they had said that this scene was their favourite it was clear that they had enjoyed the scene because of the use of the words 'Pizza' and 'Bong'. It was obvious that most of them had not considered the scene as a comparison between weed and alcohol, challenging the legality of the drugs. For our final performance we decided that the scene needed to be 'tidied up'. Our idea was fine but the 'communication to the audience' was poor, as they did not get the message we wished them to think about. We changed the scene by removing some of the parts that may have distracted from the main point of the scene. ...read more.

For our final performance we ensured that our characters and actions were well defined in order to differentiate between characters and stories. After speaking to those who viewed our final performance it was once again clear that there had been a better understanding of the different stories, and which characters were in each scene. The performance also helped us make some serious decisions as to which scenes were effective and which weren't. For example 'Go Away James' which was Ellie's bad LSD trip involved myself, as James, walking around the edge of the stage, slowly advancing on Ellie, during this she would be pleading with James to leave. James then suddenly leapt towards her, at which point there was a 'snap' back to the reality of the situation with James pleading with Ellie to 'wake up'. However the feedback from the year 10's was quite negative, as they had difficulty understanding what was happening. We also felt that the scene dragged on for too long and slowed down the entire pace of the production. It was for those reasons that the scene was cut. ...read more.