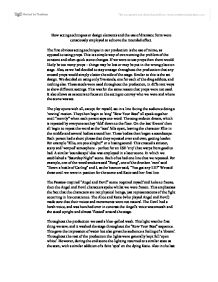 How acting techniques or design elements and the use of dramatic form were consciously employed to achieve the intended effect.

How acting techniques or design elements and the use of dramatic form were consciously employed to achieve the intended effect. The first obvious acting technique in our production is the use of mime, as opposed to using props. This is a simple way of overcoming the problem of the constant and often quick scene changes. If we were to use props then there would likely be too many props - things may be lost or may be put in the wrong place on stage. Also, as we had decided to stay onstage throughout the production that any unused props would simply clutter the side of the stage. Similar to this is the set design. We decided on using only five stools, one for each of the drug addicts, and nothing else. These stools were used throughout the production, in different ways to show different settings. This was for the same reason that props were not used. It also allows us as actors to focus on the acting to convey who we were and where the scene was set. ...read more.

The Faustus-inspired "Angel and Devil" scene required myself and Luke to freeze, then the Angel and Devil characters spoke whilst we were frozen. This emphasises the fact that the characters are not physical beings, just representations of the fight occurring in his conscience. The Alice and Katie (who played Angel and Devil) made sure that their voices and movements were not natural. The Devil had a harsh voice, and was hunched over in contrast the Angel's voice was smooth and she stood upright and almost 'floated' around the stage. Throughout the production we used a blue-gelled wash. This light was the first thing we saw, and it washed the stage throughout the "Row Your Boat" sequence. This gave the impression of water but also gives the audience a feeling of a 'dream'. Throughout the rest of the production the lights were generally kept full 'open white'. However, during the end scene the lighting returned to a similar state as the start, with a similar addition of a faint 'spot' on the dying Katie. Also in the last scene we used the song "Golden Brown" by The Stranglers. ...read more.

In the final scene the heroin addict dies. I became a demon and appeared over her slowly, looking sinister and saying: "There's always one who doesn't make it." This symbolises how her demons have 'got' her, and how she has died because of her addictions and that she was unable to escape and go into rehabilitation. "Row Your Boat" - LSD A 'snap' in the lighting, we walk upright to our chairs and sit in 'office positions'. "Angel and Devil: Should he try weed?" - Marijuana The 'soundscape' of voices in our Saturday Night characters. "News 24: Gerald McMillan" - Cocaine After a short freeze, we snap into our characters, 'barmaids' set out the stools. "Why can't we ever hear a positive story?" - LSD One character becomes a PA as the others Become their characters and enter the boardroom. "Taylor Time: Shamed Tory." - Cocaine Terry closes the programme whilst the PA quickly drags Terry from the stage. "Dealing: The Progression" - Marijuana The addict stares at the drug, then does a controlled throw to the ground. The character for the next scene enters, and crouches down to the drugs. "Welcome to Green Acres" - Everyone The Heroin addict falls from her chair. ...read more.