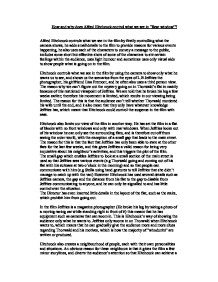 How and why does Alfred Hitchcock control what we see in "Rear window"? Alfred Hitchcock controls what we see in the film by firstly controlling what the camera shows, he adds small details to the film to provide reasons for various events happening, he also uses each of the characters to convey a message to the public, includes some short but effective shots of some of the characters to stir certain feelings within the audience, uses light humour and sometimes uses only visual aids to show people what is going on in the film. Hitchcock controls what we see in the film by using the camera to show only what he wants us to see, and shows us the scenarios from the eyes of L.B Jeffries the photographer, his girlfriend Lisa Fremont, and he often also uses a third person view. The reason why we can't figure out the mystery going on in Thorwald's flat is mainly because of this restricted viewpoint of Jeffries. We are told that he broke his leg a few weeks earlier; therefore his movement is limited, which results in our viewing being limited. The reason for this is that the audience can't tell whether Thorwald murdered his wife until the end, and it also mean that they only have whatever knowledge Jeffries has, which meant that Hitchcock could control the suspense in the film with ease. ...read more.

Jeffries only zooms in on Thorwald when Hitchcock wants to, which means that he can gradually give the audience more and more clues regarding Thorwald and his motives, which is how the majority of "whodunits" are written or produced. Hitchcock also creates a neighbourhood of people, each with their own personalities and situations. An obvious reason for these neighbours is that it gives the film a few minor storylines, and diverts the audience's attention so that Hitchcock can achieve a "cooling-off period" at his will. However it is also feasible that most of the characters reflect his view on love, and that the one of the main themes of the film is love. By looking at Miss lonelyhearts, the composer, the newly wed couple and the Thorwalds, L.B Jeffries and Lisa all at the same time we can say that Hitchcock believes that love is a con: It entrances you at the beginning, one has the most pleasure out of love with the same partner at the start of a relationship (The newly weds), but it gradually goes sour and can go down many paths. The love can be up kept, but if it does then only a fraction of the original passion remains (L.B Jeffries and Lisa), however it can also lead to arguments (The newly wed couple after a few weeks) ...read more.

Hitchcock often insinuates, rather than making a character state what is happening. A blatant example of this is when Lisa is wearing traveller's clothes at the end and is seen reading a traveller's book, but quietly starts reading a fashion magazine when she is sure that Jeffries is asleep. These insinuations hold the public's attention, and it means that they have to focus on the film in order to understand what is happening, and use their imagination. This has lead to many interpretations of his film and has sparked great interest in his films, especially amongst many of the French film critics. Thus I conclude that Hitchcock uses the camera, the characters personalities and situations, and often only shows us what is happening using only what is being shown on the camera instead of making a character state it, and controls the feelings of the audience by using parts of the film (the emotion it creates can be almost anything from tense to erotic, which gives rear window an unpredictable feel to it) so that he can keep the audience's attention, give messages to the public and control the climax and storyline of the film with great ease. ...read more.