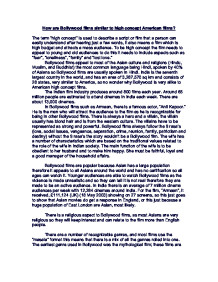 How are Bollywood films similar to high concept American films?

How are Bollywood films similar to high concept American films? The term "high concept" is used to describe a script or film that a person can easily understand after hearing just a few words, it also means a film which is high budget and attracts a mass audience. To be high concept the film needs to appeal to young and old audiences to do this it needs to include aspects such as "fear", "loneliness", "family" and "lost love." Bollywood films appeal to most of the Asian culture and religions (Hindu, Muslim, and Buddhist) the most common language being Hindi, spoken by 40% of Asians so Bollywood films are usually spoken in Hindi. India is the seventh largest country in the world, and has an area of 3,287,570 sq km and consists of 28 states, very similar to America, so no wonder why Bollywood is very alike to American high concept films. The Indian film industry produces around 800 films each year. Around 65 million people are estimated to attend cinemas in India each week. There are about 13,000 cinemas. In Bollywood films such as Armaan, there is a famous actor, "Anil Kapoor." He is the man who will attract the audience to the film as he is recognizable for being in other Bollywood films. ...read more.

The characters in the films are clearly defined and usually stereotypical. The narrative is usually episodic with loose casual connections rather than linear with strong cause and effect relationship as in Hollywood films. As in Hollywood films, the use of stars in Hindi films is important for attracting audiences; there are also many other similarities with Hollywood films. For example, some of the scenes in "Sholay" owe much to elements in Sergio Leones's Spaghetti Westerns such as "A fistful of Dollars (Italy, 1964." In Bollywood film the narrative has a distinctive structure. Although the narrative starts with a problem and works it way to a resolution, and the main character does carry the story forward, the way this is done is very different from Hollywood films. The narrative is often dependant upon fate or luck, rather than on specific characters development. The dance sequences depend upon colourful and exciting presentations that have developed and changed over time. Exotic locations are often used which can change from place to place during one song and dance sequence. The term "Asian Diaspora" denotes communities of Asian origin, which in the UK refers to people who are originally from India, Pakistan, Sri Lanka and Bangladesh. Indian films did not become widely available in Britain till the 1940s. ...read more.

Natural Born Killers is reported to be responsible for a spree killing in Germany; 'Reservoir Dogs' has been blamed for attacks against the police; the hardly artistically valid 'Childs Play' was even linked to the murder of British toddler James Bulger. Although the media has blamed violent films for these incidents, there has been no evidence to suggest that violent films were responsible for them. "In the case of the murders in Germany, it was discovered on inspection by more reputable broadsheet newspapers, that the couple in question, so apparently similar to Stones crazed Bonnie and Clyde, merely owned a poster of 'Natural Born Killers'." - taken from http://www.dbspin.com/academic/violence.htm. So this just shows how media can influence audiences, whereas Bollywood films do not portray this information, instead they are more melodramatic and only concentrate on influencing audience's to take care of family and religion. In conclusion I believe that Bollywood films are not similar to American films because they are not made on a high budget or no don't attract a mass audience. Although Bollywood films do attract mass audiences of India they do not manage to be able to attract any audiences outside India. Whereas NBK has attracted many audiences from different cultures, mostly America. The only similarities which I can see are that they both attract audiences of their own country/culture, both have a good Vs evil aspect, are both highbrid and produce a lot of movies each year. ...read more.