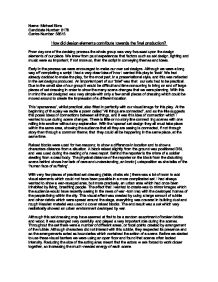 How did design elements contribute towards the final production?

Name: Michael Sims Candidate Number: 8178 Centre Number: 56515 How did design elements contribute towards the final production? From day one of the devising process the whole group was very focussed upon the design elements of our piece. We knew from past experiences that factors such as set design, lighting and music were as important, if not more so, than the script in conveying themes and ideas. Early in the process we were encouraged to make our own set designs. Although we were a long way off completing a script I had a very clear idea of how I wanted this play to 'look'. We had already decided to make the play, for the most part, in a presentational style, and this was reflected in the set designs produced. An important part of our 'brief' was that our sets had to be practical. Due to the small size of our group it would be difficult and time consuming to bring on and off large pieces of set dressing in order to show the many scene changes that we were planning. ...read more.

Before we started to use these visual barriers we were using an open floor and found that scenes often lacked intensity. Reducing the size of the acting area meant that the actors were forced to work closer together, so increasing the much-needed energy of each scene. In a corner created by our raised blocks we decided to e***t a small memorial shrine which consisted of a photo, flowers and a lantern which lighted the area, keeping it in view throughout the play. This detail strongly contrasted the harsh, man-made image created by other parts of the set. The photo showed the only 'human' element in the ruined city and strongly reinforced our themes of a 'human war'. In order to draw the audiences attention to the area the shrine was set up in mime whilst they entered. This, we felt was very important as it was the first point at which they could relate to a theme in the play, everyday seeing many memorials such as the one we used made it's personal meaning especially poignant. One decision that the group made at the beginning of writing the play was that it had to powerful, although this doesn't sound particularly decisive, it gave us a benchmark to compare all aspects to. ...read more.

These juxtapositions gave scenes a kind of sinister irony, such as is often found in media coverage of war situations. It was this media coverage that were we referencing to by using the images throughout the play, specifically, we wanted to show pictures that may have appeared throughout the media if the events of the play had occurred in the 'real world'. The many ironies that the images created were supposed to be reminiscent of a trait in news coverage, which sees reporters trying to find innocence and beauty within a horrific situation, the many pictures of children certainly worked to this end. The idea of using projections in this way had been conceived very early on in the devising process, but it took a great deal of effort to actually have them working successfully. Like our use of music, set design and the play's overall artistic elements, the projections worked to heighten the emotion of the scene, while giving the audience an idea of the 'bigger picture' of our play, and hopefully helped them to have a much greater insight into what we were actually trying to communicate with our work. ...read more.