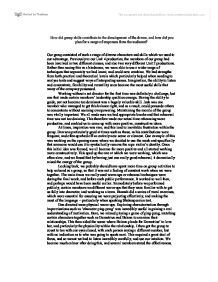 How did group skills contribute to the development of the drama, and how did you plan for a range of responses from the audience?

How did group skills contribute to the development of the drama, and how did you plan for a range of responses from the audience? Our group consisted of such a range of diverse characters and skills which we used to our advantage. Previously to our Unit 4 production, the members of our group had been involved in two different classes, and also two very different Unit 2 productions. Rather than seeing this as a hindrance, we were able to use a wider range of techniques that separately we had learnt, and could now combine. We had strengths from both practical and theoretical levels which particularly helped when needing to analyse texts and suggest ways of interpreting scenes. Imagination, the ability to listen and concentrate, flexibility and versatility soon became the most useful skills that many of the company possessed. Working without a set director for the first time was definitely a challenge, but one that made certain members' leadership qualities emerge. Having the ability to guide, yet not become too dominant was a hugely valuable skill. Josh was one member who managed to get this balance right, and as a result, could persuade others to concentrate without seeming overpowering. Maintaining the morale of the group was vitally important. We all made sure we had appropriate breaks and that rehearsal time was not too draining. ...read more.

This was irritating if unsuccessful, but creating a clear structure on paper during rehearsal time seemed to improve this aspect. Intuition was useful with improvisation, such as the Time and the Conways scene. It was almost completely ad-libbed, even during the exam performance, and we made changes every time we performed it. It was essential that Ele and I could sense what each other were thinking, and could improvise around any new material we integrated, or omissions that we made. The scenes that were very physical obviously required the trust of all group members. I fell backwards during one scene, and was caught, then picked up by two other members. Without trust, my fall would not have been convincing, as I still would have appeared nervous. Practice was an integral part of this, and the more times we rehearsed an element, the more confident we became, and the trust within the group grew. Ideas and contributions were essential in devising our performance, and so the more vocal and constructive we were, the further we developed, and at a faster pace. Clearly we could not always use every idea for practical reasons, but we continually tried to use each suggestion and practically tried them out before deciding whether we would use them or not. This then encouraged group members to contribute more, knowing that it would be treated with respect, even if it was not directly used. ...read more.

They were the less frequent moments of stillness within our relatively fast-paced production, and allowed for the audience to absorb the energy of the scene. Often, we juxtaposed these two styles together, prevented our piece from being put into a certain genre, and allowing us as actors to show our range. We had a high-energy moment using elements from A Midsummer Night's Dream, and immediately followed it with the slower, more reflective tone of the improvisation around Tristan and Yseult's "What is love?" One possible criticism of our production's structure was the fact that we used some relatively short scenes which if not treated with care, could have restricted the audience's comprehension of our concept. Early on in the development of our piece, some scenes could have seemed rushed, and the plot and relationships of a certain element would not have been understood. We didn't want to use only long scenes as they could have been tedious, especially as our concept involved communicating the enormity of blind love in society and literature. In the rehearsal process therefore, we worked hard to create smooth transitions, and ensured each scene was reshaped and refined so our concept was not ignored, and was clearly reflected throughout. The scene using elements from Ibsen's 'A Doll's House' for example seemed irrelevant when it was initially staged, and didn't seem to clearly communicate our concept. It was only until we used the chorus to slowly mime wiping off the false, doll-like facial expressions that its true contribution and importance in our piece emerged. ...read more.