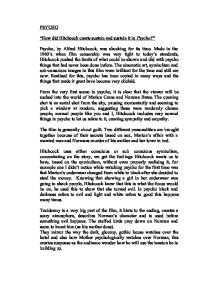 &quot;How did Hitchcock create sustain and sustain it in Psycho?&quot;

PSYCHO "How did Hitchcock create sustain and sustain it in Psycho?" Psycho, by Alfred Hitchcock, was shocking for its time. Made in the 1960's when film censorship was very tight to today's standards, Hitchcock pushed the limits of what could be shown and did with psycho things that had never been done before. The cinematic art, symbolism and sub-conscious images in this film were brilliant for the time and still are now. Realised for this, psycho has been copied in many ways and the things that made it great have become very clich�d. From the very first scene in psycho, it is clear that the viewer will be sucked into the world of Marion Crane and Norman Bates. The opening shot is an aerial shot from the sky, pausing momentarily and seeming to pick a window at random, suggesting these were randomly chosen people, normal people like you and I, Hitchcock includes very normal things in psycho to let us relate to it, creating sympathy and empathy. The film is generally about guilt. Two different personalities are brought together because of their secrets based on s*x, Marion's affair with a married man and Normans murder of his mother and her lover in bed. Hitchcock uses either conscious or sub conscious symbolism, concentrating on the story, we get the feelings Hitchcock wants us to have, based on the symbolism, without even properly realising it, for example one I didn't notice while watching psycho for the first time was that Marion's underwear changed from white to black after she decided to steal the money. ...read more.

It could be us in the shower. There is a musty shower curtain, which you can barely see through, so Marion cannot see or hear, she is totally blind to what is happening. She is simply washing as you and I do and she is very vulnerable to, this creates empathy for her. Then we see a dark figure through the mist, again, darkness represents evil. Marion showers oblivious to the dark figure moving towards her. She may be washing away the evil, the crime that she has committed as before; she decides to give back the money. The "slashing" music commonly used for deaths in psycho begins but quietly in the background the music and the figure move towards Marion simultaneously, the audience realise this and are forced to watch yet are powerless to stop it. Guilt is mixed with the complex emotions of the audience on witnessing the murder, as they knew that Marion was not safe before she did. When the figure pulls back the shower curtain, it has its back to the light so no face is seen, this makes the audience desperate to know who the figure is and creates suspense. A brutal stabbing follows, which would have been considered even more violent when it was first released than today, when the violence on screen is much more common. The audience never see a stab, we never see the knife penetrate the body, Hitchcock uses our imagination to make the ...read more.

It is similar to the death music, but not identical, death is only approaching. We see Mother sitting as though she is going to turn round by herself any moment. Lila's hand reaches towards her slowly, prolonging the audience's suspense. There is no music at this point it is silent. Silence is used here for contrast against the death music approaching. The hand waits, then touches mother. The corpse swings round very willingly as thought it wanted to turn. Lila screams in the exact same way Marion did and the death music begins suddenly out of the silence. The contrast between silence and the screaming stringed music plus the screaming Lila is massive and scares the audience to death. Hitchcock did exactly what he wanted to do to the audience. After this, Norman runs in wearing his mothers clothing, with the scream still ringing through the room. He tries to stab Lila, Sam stops him and Norman almost melts to the floor in a spasm, the suspense of this scene deflates and the audience is left in shock. In conclusion, there are many interesting ways Hitchcock created and sustained tension in psycho. He used the audiences imagination to make what very little he was allowed to show on screen much more powerful, Hitchcock knew how people would react to symbols he placed in Psycho and used that to his advantage in making them feel what he wanted them to, and it worked very well. ...read more.