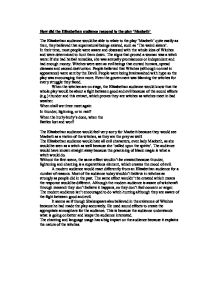 How did the Elizabethan audience respond to the play &amp;#145;Macbeth&amp;#146;

How did the Elizabethan audience respond to the play 'Macbeth' The Elizabethan audience would be able to relate to the play 'Macbeth' quite easily as then, they believed that supernatural beings existed, such as 'The weird sisters'. In their time, most people were aware and obsessed with the whole idea of Witches and were determined to hunt them down. The signs that proved a woman was a witch were: If she had herbal remedies, she was s******y promiscuous or independent and had enough money. Witches were seen as evil beings that cursed humans, spread diseases and caused destruction. People believed that Witches (although normal in appearance) ...read more.

thunder and this extract, which proves they are witches as witches meet in bad weather. When shall we three meet again In thunder, lightning, or in rain? When the hurly-burly's done, when the Battles lost and won? The Elizabethan audience would feel very sorry for Macbeth because they would see Macbeth as a victim of the witches, as they are the prey as well. The Elizabethan audience would hate all evil characters, even lady Macbeth, as she would be seen as a witch as well because she 'called upon the spirits'. ...read more.

The same effect wouldn't be created which means the response would be different. Although the modern audience is aware of witchcraft through research they don't believe it happens, so they don't feel concern or anger. The modern audience isn't encouraged to do witch-hunting although they are aware of the fight between good and evil. It seems as if though Shakespeare also believed in the existence of Witches because he had made the play accurately. He used sound effects to create the appropriate atmosphere for the audience. This is because the audience understands what is going on better and keeps the audience interested. The chanting and language usage has a big impact on the audience because it explains the nature of the witches. ...read more.