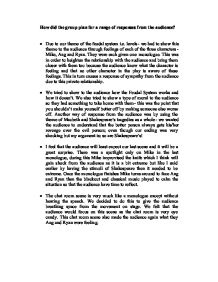 How did the group plan for a range of responses from the audience? * Due to our theme of the feudal system i.e. levels- we had to show this theme to the audience through feelings of each of the three characters- Mike, Ang and Ryan. They were each given one monologue. This was in order to heighten the relationship with the audience and bring them closer with them too because the audience know what the character is feeling and that no other character in the play is aware of these feelings. This in turn causes a response of sympathy from the audience due to this private relationship. * We tried to show to the audience how the Feudal System works and how it doesn't. We also tried to show a type of moral to the audience so they had something to take home with them- this was the point that you shouldn't make yourself better off by making someone else worse off. Another way of response from the audience was by using the theme of Macbeth and Shakespeare's tragedies as a whole- we wanted the audience to understand that the better person always gets his/her revenge over the evil person; even though our ending was very shocking but my argument is: so are Shakespeare's! ...read more.

Therefore we did have a solid background and picked out bits that we thought would work on stage. * Also I was fortunate enough to have been performing in the school production of Macbeth during this drama process. I picked up a lot of material from here that was used in the process for example the tableau scene; in Macbeth there was also the tableau scene which laid out events of the play. Also I took a speech from Macbeth to give the performance more effect and keeping it in line with our stimulus. Evaluate the ways in which ideas were communicated to the audience. * Communicating to the audience is very important, without this the play has no meaning and structure and it just makes the audience bored, which causes them to stop listening and watching the play. * The idea of the Chat Room scene was very effective; this was an idea from one of the members of the group. We decided to project it onto a projector screen whilst there was a blackout. Music was played over the top of this scene so that it didn't become boring for the audience to just sit and read what was on the screen. ...read more.

* Firstly Shakespeare has influenced our play. We added the quote from Macbeth as it was one of our stimuli. I consider him to be the greatest playwright in history and therefore have a definite mention. Also the point about tragedy and how it is connected to Shakespeare was used in the play. * The school production of Macbeth was directed by Sarah Swiddenbank. She used the tableau in her Macbeth and us as a group found it a very suitable way of communicating to the audience and therefore designed our own. Also in her version of Macbeth, she too used levels with a red carpet going down the middle of the stage to represent the way to the 'top' as it were therefore representing a type of feudal system. * My good friend Stu Stealey who was the designer of the school production of Macbeth used the red lights in that production when the tableau scene was introduced to the audience and therefore we decided to use it too as red is the best colour when using this technique. * Another mention of Sarah Swiddenbank and how wonderfully she uses music to interpret meaning to the audience in her version of Macbeth. This helped us immensely on choosing the correct music for certain scenes. ...read more.