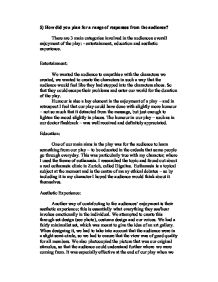 5) How did you plan for a range of responses from the audience? There are 3 main categories involved in the audiences overall enjoyment of the play: - entertainment, education and aesthetic experience. Entertainment: We wanted the audience to empathise with the characters we created, we wanted to create the characters in such a way that the audience would feel like they had stepped into the characters shoes. So that they could escape their problems and enter our world for the duration of the play. Humour is also a key element in the enjoyment of a play - and in retrospect I feel that our play could have done with slightly more humour - not so much that it detracted from the message, but just enough to lighten the mood slightly in places. The humour in our play - such as in our doctor flashback - was well received and definitely appreciated. Education: One of our main aims in the play was for the audience to learn something from our play - to be educated in the ordeals that some people go through everyday. This was particularly true with my character; where I used the theme of euthanasia. ...read more.

Character Creation: When creating our characters the main concern was that we didn't end up with stereotypical characters, we wanted 5 different contrasting characters. So we decided to use the randomisation technique whereby we hoped the characters would be more individual and we would avoid such characterisation as 'the blonde' or 'the snob'. However this did not really work, we found that the characters became too far fetched and thus were exceedingly difficult to make convincing - especially when we were trying to convey a serious message through a monologue. We decided to just go away and think for ourselves about what characters we could do, and most of us changed our minds several times. It took me a long time to decide on a character that I felt happy with; for a long time in the early stages I was going to be a struggling musician, but in many ways this character lacked sufficient depth to make an interesting monologue with. It also became very close to my own personality as I went on - meaning that it would not have been an appropriate choice. I decided on my actual character after reading a newspaper article about euthanasia, when I realised that I could probably write quite effectively on that subject. ...read more.

But they all seem almost too 'normal' as if they are trying to look that way - the people are dressed up in their Sunday best. It seems like a typically idyllic scene, except that the people in the picture although externally ordinary have a lot of emotional baggage on the inside that is hidden from the world by their front/public image; in fact their inner isolationism gave us our title. Our decision to do monologues came from the stimulus in that we wanted to have an insight into the thoughts and lives of the people; the main problem we encountered with this technique is that it comes across as very static. Our answer to that was the flashbacks, during or after the monologue we would step through the picture into the frontal stage area and act out a flashback from the characters life. For example in my flashback we acted out the wedding speeches. At the end of the play we went from the last flashback and assumed poses of people in the picture in a styleised manner whilst piano music of the time was playing. This was aesthetically pleasing, and gave a nice end to the play. The characters we made actually seemed to fit into the picture at the end, mainly coincidentally but it worked well. ...read more.