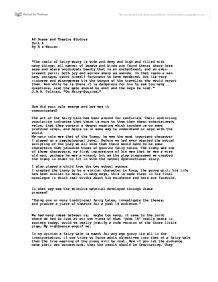 A2 Drama and Theatre Studies Unit 4 By R s Warren "The realm of fairy-story is wide and deep and high and filled with many things: all manner of beasts and birds are found there; shore less seas and stars uncounted; beauty that is an enchantment, and an ever- present peril; both joy and sorrow sharp as swords. In that realm a man may, perhaps, count himself fortunate to have wandered, but its very richness and strangeness tie the tongue of the traveller who would report them. And while he is there it is dangerous for him to ask too many questions, lest the gate should be shut and the keys be lost." J.R.R. Tolkien, "On Fairy-Stories," How did your role emerge and how was it communicated? The art of the fairy tale has been around for centuries. Their continuing popularity indicates that there is more to them than sheer entertainment value, that they contain a deeper meaning which touches us on some profound level, and helps us in some way to understand or cope with the world. My main role was that of the Tramp, he was the most important character I played on a psychological level. Before we had even started the actual scripting of the play we all knew that there would have to be some characters that parodied those of genuine fairy tales. The tramp was one of those characters, my first impressions of him was that he was a wise old man, perhaps he was a wizard, but as the play progressed we created the tramp in order to fit in with the rather dysfunctional story. I also played a child from the two school scenes. I created the tramp to be a similar character to Lucy, the young girl, his life has been similar to hers, in many ways, this is made clear in his final monologue in which real truths about his existence and hers are foretold. ...read more.

tells Lucy the little girl a story, this story follows similar themes to that of the play, basically I created it to sum up the play if you like, to iron out any confusion, that our merry little production may have caused. A lot of the characters were all quite natural, and finding a balance between contrasting characters proved to be very difficult. Some members of the cast used the same accent for a child as they did for there older characters. I began to wonder if we should all blend together to become one big super character, but I managed to stop myself for fear of being confronted by Viv's inner mind didn't. My main character the Tramp was old, but wise, the sort who had travelled the world, and got board of it. His movement were slow and nervous around other people, he was to used to being on his own and did not know how to react around people, and it was this uncertainty that I tried to produce. How did the group plan for a range of responses from the audience? Our main objective was to get the audiences attention. I wanted the audience to be intrigued, and persuade them to look into a land of fairy tales, and then ask themselves where they would rather be. Our very first scene pulled the audience in to the theme of fairy tales, we used an essence machine to convey these themes. The final scene was probably the most powerful of all, here we combined many different factors, using them all to there limits, we had music playing and a thought inducing dark melody, perfect for making neck hairs stand up. We had a deep red wash flooding the stage, the only colours you could see were red and black, then we had a rather dashing contrast as the scene takes a dramatic twist, and just before our starring role finds peace in the very place she was running from we have probably the most technically remarkable piece of equipment known to man, the mirror ball. ...read more.

Historically Fairy Tales have been passed down the generations, who knows how they first started out. Ancient tales that could have been born out of reality. How do we know there was not once a magical world full of dragons and elves. A world that may have once harvested such stories as Jack and the Beanstalk or Cinderella. How can we truly judge what we do not understand. Have you ever looked at a fairy tale, years have passed since you first read it and you read a different story all together. Its this magic that may indeed work on levels that make a true fairy tale what it is. The look on a child's eye when you read to them about witches and trolls. Fairy Tales were composed to express eternal joys, sorrows, hopes, and dreams of human kind. Although these folk tales may be aimed at children, they surely reflect the values, assumptions, and concerns of our modern cultural traditions. Indicate how the influences and ideas of other playwrights and/or directors, designers and performers have been used. I truly enjoy reading stories from distant lands of magic, where Kings battle furiously to save princesses, who are trapped in towers, that dragons guard. Throughout my youth I have followed the endless adventures of Merlin and King Arthur. I have battled side by side with Lancelot and other knights. I too created a world of distant glories, but that was all it was distant. William Yeats was my main inspiration for this play. When I first read a selection of his poems they seemed to remind me of Faery Land, as he calls it. An instinctive childhood dream reawakened. I don't think I used any ideas that were specific to any other playwright or director, we all had enough knowledge between us to create the play. The play is simple, it follows fundamental ideas on life, some have commented on a slight similarity to Alice in Wonderland, I dismiss these punishing remarks with a cold heart. It was my idea first any way. 11 ...read more.