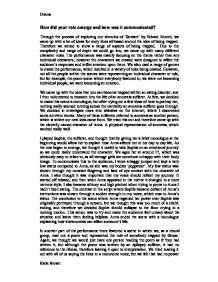 How did your role emerge, and how was it communicated?

How did your role emerge and how was it communicated? Through the process of exploring our stimulus of 'Scream' by Edvard Munch, we came up with a lot of ideas for story lines all based around the idea of being trapped. Therefore we aimed to show a range of aspects of being trapped. Due to the complexity and range of depth we could go into, we came up with many different character roles. The performance was mainly focusing on the theme rather than any individual characters, however the characters we created were designed to affect the audience's responses and inflict emotion upon them. We also used a range of genres to create the performance, which resulted in a variety of roles being created. However, not all the people within the scenes were representing an individual character or role, but for example, the poem scene which everybody featured in, we were not becoming individual people, we were becoming an emotion. We came up with the idea that you can become trapped within an eating disorder, and I then volunteered to research into the life of an anorexia sufferer. ...read more.

The conclusion to the scene where Anna regained her power over Sophie was originally portrayed through a scream, but we thought this was too much of a clich� ending, and therefore we decided Sophie should collapse to the floor crying in a rocking motion. This action was to try and make the audience feel uneasy about the situation and leave them feeling helpless. Anna ended the scene with a monologue explaining how she/anorexia can affect someone's life. In another part of the performance there featured a scene in which we, as a choral group, read out a poem and represented the role of somebody trapped by illness. Again, we thought we would just have one person reading the poem as if they had written it, but although the poem was written by an epilepsy sufferer, it had no reference to the illness, therefore leaving it open to interpretation. We tried reading it out with all of us saying the lines in a monotonic voice, but we felt that had no power or emphasis, so we decided to split the lines up between us. ...read more.

We thought this would be a powerful way to show the lack of responsibility people want to take for poverty, and the way people simply walk by without turning a blind eye. This scene proved difficult for me, as typically I am a very vocal performer. A lot of my emotions come from my voice, and obviously within this scene I could not do this. Therefore I had to work on my facial expressions and gestures through various rehearsal techniques, including mime and melodrama. I did feel an improvement within my character after practicing the scene more and more. I started off by making the character over the top and gradually toning it down, to create a more realistic effect. The audience however didn't seem to grasp this concept, as proven through evaluative questionnaires. Looking back on this scene now, I think that perhaps a different approach could have been taken. The mask's were maybe unnecessary, and the ignorance of today's society that we we're trying to show could have been shown through more character interaction. Not necessarily through voice, as we had already dismissed that idea, but through stronger use of physicality. ?? ?? ?? ?? Drama Katie Brown ...read more.