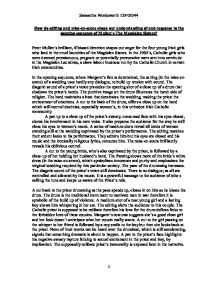 How do editing and mise-en-scene shape our understanding of and response to the opening sequence of Mullen's The Magdalen Sisters?

How do editing and mise-en-scene shape our understanding of and response to the opening sequence of Mullen's The Magdalen Sisters? Peter Mullen's brilliant, if biased direction shapes our anger for the four young Irish girls who land in the cruel laundries of the Magdalen Sisters. In the 1960's, Catholic girls who were deemed promiscuous, pregnant or potentially provocative were sent into servitude in the Magdalen Laundries, a slave-labour business run by the Catholic Church in certain Irish communities. In the opening sequence, where Margaret's fate is determined, the setting (in the mise-en-scene) of a wedding uses hardly any dialogue, to build up tension with sound. The diagetic sound of a priest's voice precedes the opening shot of a close up of a drum that shadows the priest's hands. The punitive image on the drum illustrates the harsh side of religion. The hand maintains a beat that dominates the wedding, making the priest the orchestrator of emotions. A cut to the back of the drum, offers a close up on the hand which will control destinies, especially women's, in this orthodox Irish Catholic community. A pan up to a close up of the priest's sweaty, consumed face with his eyes closed, shows his involvement in his own voice. ...read more.

As she struggles to leave the room a cut reveals the back of Margaret followed by a quick cut to her slapping him and a cut back to the front of her cousin's face that shows fear of Margaret's reaction. A medium shot of Kevin leaving the room closing the door behind him makes us feel its over but as Margaret enters the frame to open the door, she is suddenly hit in the face as Kevin charges back in the room with a diagetic smash of the door smacking hard into her face. A series of quick cuts of close ups of Margaret's struggle to get free but Kevin pushes her to the floor and rapes her. Diagetic sound creates the insensitive brutality in thuds and bangs. This is the first time we hear dialogue, and it comes as a shock to the audience because of its content, the way its delivered and the violent nature of his act. She pleads with him but he just covers up her mouth, as all girls will be silenced in the narrative. It is shocking and upsetting, as he's so cruel and uncaring. A cut to the celebration downstairs frames a medium shot of a young boy sitting alone covering his ears to the loud music, which shows the power of the music over the characters. ...read more.

A cut back to a close up of the father and priest as they emerge shows the sweat on their faces increasing tension. The constant glances at Margaret indicate to the audience that the outcome of the discussion will not be fair. A cut back to Margaret as she watches her father in distress, is followed by a point of view shot of her father with horrified anger on his face as he stares intently at his daughter. A cut back to a close up of Margaret reveals she realizes it has all gone wrong as she feels the anger from her father. The music fades. The diagetic sound of bagpipe note fades into what sounds like a car horn cueing a cut to a long shot of a black car coming towards us. The sudden cut to the car coming to take Margaret away prepares us for the sudden harsh decision to cast her out. Mullen uses the film codes to make us feel how horribly unfair and unfeeling this is, so we are set up to expect the similar destiny for all the other girls condemned as sinners by fathers and fathers. Mullen has weighted our sympathies strongly but it is effective as we are so shocked and involved from the outset. Word Count: 1613 ?? ?? ?? ?? Samantha Wordsworth 12F 03344 1 ...read more.