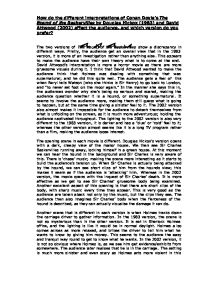 How do the different interpretations of Conan Doyle's The Hound of the Baskervilles by Douglas Hickox (1983) and David Attwood (2002) affect the audience, and which version do you prefer?

How do the different interpretations of Conan Doyle's The Hound of the Baskervilles by Douglas Hickox (1983) and David Attwood (2002) affect the audience, and which version do you prefer? The two versions of The Hound of the Baskervilles show a discrepancy in different ways. Firstly, the audience get an overall view that in the 1983 version, it is more of an investigation rather than anything else. This appears to make the audience have their own theory what is to come at the end. David Attwood's interpretation is more a horror movie as there are more gruesome visuals during it. I think that David Attwood wanted to make the audience think that Holmes was dealing with something that was supernatural; and he did this quite well. The audience gets a feel of this when Beryl tells Watson (who she thinks is Sir Henry) to go back to London, and "to never set foot on the moor again." In the manner she says this in, the audiences wonder why she's being so serious and scared, making the audience question whether it is a hound, or something supernatural. It seems to involve the audience more, making them still guess what is going to happen, but at the same time giving a sinister feel to it. The 2002 version also almost makes it impossible for the audience to detach themselves from what is unfolding on the screen, as it is much more adventurous; holding the audience captivated throughout. ...read more.

In the 2002 version, it is not so obvious where Holmes is, as we see him get evidence/exhibits from somewhere. The audience later realises that he is in the carriage. The setting is much more sinister and even scary as Holmes acts more violent in this scene, using physical contact to gain information from the driver. The camera directing is much better in the 2002 movie in this scene, not only because it is set in different places and time, but it makes the audience feel more involved in the story. In the 1983 version, this scene doesn't seem so 'important' as is comes across to be in David Attwood's interpretation. This might be because it is more serious in the second, and the atmosphere was colder and had a darker vibe to it. In David Attwood's version, there is a scene that is not in the book. This is when Dr. Mortimer's wife leads a s�ance at the dinner party to contact Sir Charles Baskervilles to ask him about his death. The whole scene is quite creepy, particularly when the hound appears at the window; which is unexpected to the audience. There isn't actual music in this scene, but music affects such as wind blows and low piano notes, making it scary; as if the music is portraying Sir Charles' presence. The endings in the movie were different to one another; but at the same time slightly similar. ...read more.

Watson seems very different in these two particular productions. Apart from appearance, his personality a great deal. In the 1983 film, Watson comes across as being a bit shy, and afraid to say things. He also comes across as being whiney, when he says, "Then you use me, and yet do not trust me!" The audience can also notice he is always keen to please anyone, making him almost desperate for attention - the audience is invited to laugh at him, and feel that he is foolish. Whereas in the other film, he is not afraid to say anything in order stand up for himself. The audience can see this (in the 2002 film) when he angrily asks Holmes to "keep him more informed in what's going on." In conclusion, I prefer David Attwood's version of The Hound of the Baskervilles. This is because I find it much more interesting because there is much more special effects which make it have a better visual content. I prefer the 2002 version because it is also full of suspense and its is much more bloodcurdling. This version was much easier to follow too, whereas Douglas Hickox's' version seemed more complex and appealing to the audience. I have also chosen this version because I thought that the characters were more open to their personalities, and the audience were able to know what kind of people they are more than in Douglas Hickox's version. ...read more.