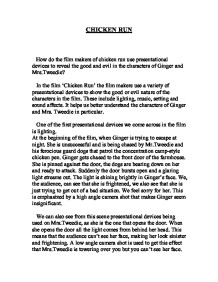 How do the film makers of chicken run use presentational devices to reveal the good and evil in the characters of Ginger and Mrs.Tweedie?

CHICKEN RUN How do the film makers of chicken run use presentational devices to reveal the good and evil in the characters of Ginger and Mrs.Tweedie? In the film 'Chicken Run' the film makers use a variety of presentational devices to show the good or evil nature of the characters in the film. These include lighting, music, setting and sound affects. It helps us better understand the characters of Ginger and Mrs. Tweedie in particular. One of the first presentational devices we come across in the film is lighting. At the beginning of the film, when Ginger is trying to escape at night. She is unsuccessful and is being chased by Mr.Tweedie and his ferocious guard dogs that patrol the concentration camp-style chicken pen. Ginger gets chased to the front door of the farmhouse. She is pinned against the door, the dogs are bearing down on her and ready to attack. Suddenly the door bursts open and a glaring light streams out. ...read more.

The bell in the chicken pen goes off and all the chickens hurriedly rush into line for inspection. Then Mrs.Tweedie walks out to the chickens it's similar the scene in Star wars when Darth Vader walks onto the Death Star. The music is sinister and the chickens are lined up at the side. We see that the chickens are trembling and look down rite scared. The music used starts of evil and quite. Then as Mrs.Tweedie walks down the line it gets louder and faster but still sounding evil and building tension. It keeps building up the tension until she gets to a chicken called Edwina. The music goes DUN DUN DUN! And which makes the audience feel whats going to happen now as Mrs.Tweedie looks down at her chart to see an absent of eggs from Edwina. She then looks down at Edwina who is shaking like mad and looking terrified. Then a low angle camera shot of Mrs.Tweedie's face smiling evilly. ...read more.

It makes the audience feel sad for the chickens. The whole atmosphere is sad and it starts to rain. This emphasizes that the atmosphere is crying for the chickens creating an even more somber mood. In one scene three presentational devices rolled into one. This is when the Tweedies are unloading the machinery. Mrs.Tweedie gets out a saw blade in this cramped she area. Mrs.Tweedie starts to talk about the fate of the chickens. As she does this she spins the saw blade round and looks at her self in the reflection of the spinning saw blade, whilst it's making this awesome and evil 'shing' noise all the time she's talking. Mr.Tweedie looks very nervous and this makes the audience think that Mrs.Tweedie is very violent and that there is no chance of even an ounce of good coming out this women. In conclusion we know that Mrs.Tweedie her time. You only have to watch the film for five minutes to realize this. She is that evil! We also see that Ginger is the complete opposite. A good person and a determined leader. Finally she puts others before herself. By Will c***s ...read more.