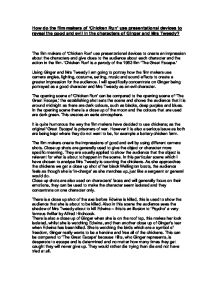 How do the film makers of 'Chicken Run' use presentational devices to reveal the good and evil in the characters of Ginger and Mrs Tweedy?

How do the film makers of 'Chicken Run' use presentational devices to reveal the good and evil in the characters of Ginger and Mrs Tweedy? The film makers of 'Chicken Run' use presentational devices to create an impression about the characters and give clues to the audience about each character and the action in the film. 'Chicken Run' is a parody of the 1963 film 'The Great Escape.' Using Ginger and Mrs Tweedy I am going to portray how the film makers use camera angles, lighting, costume, setting, music and sound effects to create a greater impression for the audience. I will specifically concentrate on Ginger being portrayed as a good character and Mrs Tweedy as an evil character. The opening scene of 'Chicken Run' can be compared to the opening scene of 'The Great Escape,' the establishing shot sets the scene and shows the audience that it is around midnight as there are dark colours, such as blacks, deep purples and blues. In the opening scene there is a close up of the moon and the colours that are used are dark green. This creates an eerie atmosphere. It is quite humorous the way the film makers have decided to use chickens; as the original 'Great Escape' is prisoners of war. However it is also a serious issue as both are being kept where they do not want to be, for example a battery chicken farm. The film makers create the impressions of good and evil by using different camera shots. Close up shots are generally used to give the object or character more specific meaning. They are usually applied to show the audience that the object is relevant for what is about to happen in the scene. In this particular scene which I have chosen to analyse Mrs Tweedy is counting the chickens. As she approaches the chickens we get a close up shot of her black Wellington boots, the audience feels as though she is 'in-charge' as she marches up, just like a sergeant or general would do. ...read more.

Ginger wears the same costume throughout the film; this shows that it is obviously very special to her. Even when she almost loses her hat in the pie making machine she just grabs it just in time, this is similar to Indiana Jones, as he is shown as a hero and just manages to get his hat in time as well. The lighting in the opening scene adds to portraying Ginger as being a brave chicken, she is hiding in the shadows and it is dark but there is light on her face, this highlights her facial expressions. The music, in the opening scene, is the same music that is in 'The Great Escape,' it is loud and upbeat. The barking of the dogs creates a tense atmosphere for the audience and the suspense builds up and becomes more dramatic towards the climax when Mrs Tweedy opens the door. There are loud noises to make the audience jump and feel gripped. Furthermore, when Ginger is being chased by the dogs her body language tells us a lot about her character as she is brave and desperate to escape. She is a good example of a heroine because she puts the group before herself. Although, her wide eyes show us that she is scared and she stumbles into a gnome. This reminds the audience of her size and vulnerability. Nevertheless, she is fearless and quick thinking when she tries to defend herself with the gnome. Then the door opens and even the violent and scary looking dogs quiver with fear, this informs the audience that something scary is going to appear next. Ginger is also shown as a heroine when Rocky first appears on the chicken farm, she sees Rocky flying and so she presumes that he is their answer to get out of the chicken farm and he will teach them all how to fly. ...read more.

The music is a traditional and brave sound because it is when the chickens are finally escaping. Mrs Tweedy's body language suggests to the audience that she is determined and an example of a 'good villain' because she will not give up until she gets what she wants. She is baring her teeth like a dog, this is effective because it makes her look like an animal. Her legs are dangling and she is gripping on this also shows her determination and fortitude and that she will not let go. The ending, however is the opposite of the ending to 'The Great Escape' because in 'The Great Escape' it is a sad ending because many of the airmen die. However 'Chicken Run' has a happy ending because all of the chickens are free, I think the film had to have a happy ending because it is aimed basically at all ages and it would be too upsetting for younger children. In conclusion, I think that 'Chicken Run' is a clever and enjoyable film for all ages. By using presentational devices it gives clues to the audience rather than just telling them. It is humorous but also adds that gripping touch. I have learnt that film makers use presentational devices so that the film is not all obvious, they indicate about what the characters are like by using devices such as characters body language to show the audience whether the characters are good or evil. I have also learnt that a film is not just about characters and the action but it is also about how a film maker uses elements of film language to add effect to the film and to the audience. I enjoyed doing the 'Chicken Run' project because I think it is a good film and excellent to watch! (Even though I could probably say it word for word now!!!) ...read more.