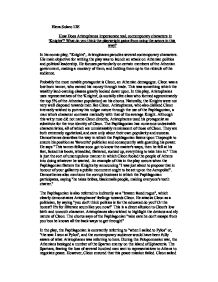 How Does Aristophanes impersonate real, contemporary characters in 'Knights'? What do you think the playwright gains from using the actors in this way?

Elena Solaro 12E How Does Aristophanes impersonate real, contemporary characters in 'Knights'? What do you think the playwright gains from using the actors in this way? In his comic play, "Knights", Aristophanes parodies several contemporary characters. His main objective for writing the play was to launch an attack on Athenian politics and political leadership. He focuses particularly on certain members of the Athenian government, making a mockery of them, and holding them up to the ridicule of the audience. Probably the most notable protagonist is Cleon, an Athenian demagogue. Cleon was a low born tanner, who earned his money through trade. This was something which the wealthy land-owning classes greatly looked down upon. In this play, Aristophanes uses representatives of the 'Knights', (a socially elite class who formed approximately the top 5% of the Athenian population) as his chorus. Naturally, the Knights were not very well disposed towards men like Cleon. Aristophanes, who also disliked Cleon intensely wished to portray his vulgar nature through the use of the Paphlagonian, a man who's character contrasts markedly with that of the average Knight. Although this witty ruse did not name Cleon directly, Aristophanes used his protagonist as substitute for the true identity of Cleon. The Paphlagonian has numerous undesirable characteristics, all of which are unmistakably reminiscent of those of Cleon. They are both extremely egotistical, and care only about their own popularity and success. Demosthenes describes the way in which the Paphlagonian fawns upon Thepeople to ensure his position as 'favourite' politician and consequently safe guarding his power. ...read more.

Thepeople is easily swayed by such lavish attention and flattery. He warms immediately to the sausage-seller when he brings him a cushion upon which to rest, saying "That was a truly noble act of yours. You are indeed a lover of Thepeople". Similarly, when the sausage seller offers Thepeople a new pair of shoes, he says "I really must say, you're the best friend I can ever remember Thepeople having." It is amusing to think how quickly the Paphlagonian has fallen out of favour with Thepeople, and Aristophanes does this to highlight just how fickle the people of Athens really were. He felt that the Athenians were no longer in control, but 'under the thumb' of unscrupulous political puppeteers like Cleon. Thepeople is also easily tricked, an example of this being when the sausage-seller and the Paphlagonian are offering Thepeople their gifts. The Paphlagonian produces a dish of jugged hare, much to the dismay of the sausage-seller, who cannot rival this offering with any of his own. However, quick to beat the Paphlagonian at his own game the sausage-seller cunningly distracts him by pointing over in the distance to a group of "ambassadors, with purses full of money!" Typically, the Paphlagonian's attention is captured by the prospect of swindling money, and the sausage-seller promptly steals the jugged hare, passing it off as his own. Naturally, Thepeople is delighted with the dish! By the end of the second act, Thepeople has transformed back into his old self, realising how the Paphlagonian has been "pulling the wool over his eyes". ...read more.

It is enjoyable to see such characters held up to ridicule. Visual humour provides another source of comedy in 'Knights'. There are several examples of 'knockabout' humour, as well as displays of mock violence. An episode which would certainly achieve a laugh in the audience is when the Paphlagonian and the sausage-seller run into the house to collect their oracles. They both run to the door, banging into each other. Similarly, when they exit the house, laden with scrolls, they collide once more, before eventually 'disentangling themselves' and rushing breathlessly back to Thepeople. As well as having his characters indulge in a little of this 'slapstick' comedy, Aristophanes also has a pool of 'stock' jokes, which are immediately available. these jokes play on the audience's knowledge and perception of the characters and situations. This is how the playwright who chooses to impersonate real contemporary characters manages to attain the audience's awareness. For example, there are several references made to Cleon's trade as a tanner. When the Paphlagonian offers Thepeople a new leather coat, he is disgusted, exclaiming "This leather stinks to high heaven!" This rejection of his gift makes the Paphlagonian look utterly ridiculous, and is a direct allusion to the uncleanliness of the lower classes i.e. Cleon! Another example can be found in the heated exchange between the Paphlagonian and the sausage-seller at the beginning of act two. The sausage seller asks "What does baby like best? Real stuffed leather purses?" This comment reveals the unscrupulous behaviour of Cleon, who cheats people out of money by selling purses which are made of stuffed leather, not the real thing. ...read more.