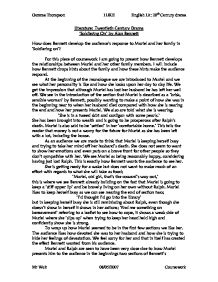 How does Bennett develop the audience's response to Muriel and her family in 'Soldiering on'?

Literature: Twentieth Century Drama 'Soldiering On' by Alan Bennett How does Bennett develop the audience's response to Muriel and her family in 'Soldiering on'? For this piece of coursework I am going to present how Bennett develops the relationships between Muriel and her other family members. I will include how Bennett drops hints about the family and how these hints make the audience respond. At the beginning of the monologue we are introduced to Muriel and we see what her personality is like and how she looks upon her day to day life. We get the impression that although Muriel has lost her husband he has left her well off. We see in the introduction of the section that Muriel is described as a 'brisk, sensible woman' by Bennett, possibly wanting to make a point of how she was in the beginning near to when her husband died compared with how she is nearing the end and how her presents Muriel. We also are told what she is wearing; 'She is in a tweed skirt and cardigan with some pearls.' She has been brought into wealth and is going to be prosperous after Ralph's death. Muriel is also said to be 'settled' in her 'comfortable home.' This tells the reader that money is not a worry for the future for Muriel as she has been left with a lot, including the house. As an audience we are made to think that Muriel is keeping herself busy and trying to take her mind off her husband's death. She does not seem to want to show her emotions and even puts on a brave front for other people so they don't sympathise with her. We see Muriel as being reasonably happy, considering having just lost Ralph. This is exactly how Bennett wants the audience to see her. She is getting ready for a wake but does not want to make much of an effort with regards to what she will take as food; 'Muriel, old ...read more.

Muriel is shown to feel almost embarrassed of Margaret. She did not like the relationship between Margaret and Ralph which may have some sort of reflection as to why she feels this way about her daughter. Muriel wants to stop feeling embarrassed because of Margaret's action; 'Come along and we'll find you a tablet' This makes Margaret sleep much to Muriel's relief but not solving her problem for very long. As we see Margaret in the second section of the monologue the audience are made to think she is a burden on the family and brings shame to them through the way she acts etc; 'with her bag packed and her outside coat on, and for some reason Wellington boats. Said the police were coming.' Margaret is not very graceful in the way she carries herself, she is described to 'slump' and 'plonk'. Muriel did not like the relationship that Ralph had with Margaret which shows through in the amount of money that was left for her in his will. The audience is almost suspicious of this which is how Bennett wants them to think. Why was Muriel not comfortable with their relationship? 'tied up so tight not even Giles could get his hands on it' With causes some suspicion about this father daughter relationship, why were they so close? The audience starts to question the relationship. As we move through into section three and four we start to get more of an insight into what Muriel is like with regards to her family and her personality. Muriel is very dignified and wants to keep a presentable front when people are coming into her home and taking her possessions. People start to strip her of her things resulting in her being much undignified and the audience feels sorry for her. Muriel begins to realise what her family is really like and begins to realise what Giles has done to hurt her and take the things that are lawfully hers. ...read more.

She blames herself for a lot of what happens and thinks that because she spent a lot of her time with Giles as he was her favourite child that she drove Ralph to Margaret. This of course to the audience is not true but Bennett is presenting Muriel to be very deluded; 'I'm not a tragic woman' This statement of which the audience knows is not true and feels frustrated that Muriel cannot see this. Margaret has become accepted by Muriel since she has 'slimmed down' and their relationship has blossomed. Margaret talks about how she 'Doesn't blame Him' talking of Ralph. Muriel at this point trails off, letting the audience know what Margaret was talking about and she does not want to face up to it. Margaret's life had fallen apart since the way Ralph treated her as a child. Her life fell apart and Muriel feels guilty for that and now their relationship is becoming better as the guilt makes it's way into Muriel's conscience mind and wants to make it up to her daughter. Giles has completely changed in the eyes of the audience from the start of the monologue to how we perceive him in the end section. He does not see much of Muriel anymore which suggests he got what he wanted to the audience and then has left her in his mess. Giles also could be feeling guilty for what he did although this is unlikely as he went through with ruining his mother. To conclude, this monologue develops the audience's response to the Muriel and her family in a lot of different ways throughout. Bennett has made the audience jump to conclusions, think opposite things about people who turn out quite nasty and rather cruel. The audience's response to this monologue is one of great confusion over the aspect of what Ralph did exactly to Muriel and sheer discontentment towards other family members. But happiness towards the relationship that was once invisible to that of a very strong bond. ?? ?? ?? ?? Gemma Thompson 11JKE English Lit: 20th Century drama Mr Weir 08/05/2007 Coursework ...read more.