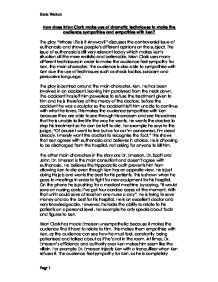 How does Brian Clark make use of dramatic techniques to make the audience sympathise and empathise with Ken?

How does Brian Clark make use of dramatic techniques to make the audience sympathise and empathise with Ken? The play "Whose Life is it Anyway?" discusses the controversial issue of euthanasia and shows people's different opinions on the subject. The issue of euthanasia is still very relevant today which makes Ken's situation all the more realistic and believable. Brian Clark uses many different techniques in order to make the audience feel sympathy for Ken, the main character. The audience is also able to sympathise with Ken due the use of techniques such as shock tactics, sarcasm and persuasive language. The play is centred around the main character, Ken. He has been involved in an accident, leaving him paralysed from the neck down. The accident has left him powerless to refuse the treatment given to him and he is therefore at the mercy of the doctors. Before the accident he was a sculptor so the accident left him unable to continue with what he loves. This makes the audience sympathise with Ken because they are able to see through his sarcasm and see his sadness that he is unable to live life the way he wants. He wants the doctors to stop his treatment so he can be left to die. For example he says to the judge, "Of course I want to live but as far as I'm concerned, I'm dead already. I merely want the doctors to recognise the fact." ...read more.

These metaphors tell us Ken's views on the medical profession, describing the medical profession negatively and suggesting that it is run like an army when it says "regiment". The second metaphor describes it as an "industry" where everyone is optimistic even when there is no hope. Also the word "industry" creates the image of an impersonal production line where the patients are processed. It is patronising for Ken and makes the audience feel sympathy for him. Clark also uses very persuasive language which includes emotive words and clear vocabulary. Ken uses very persuasive language when he convinces Dr Scott not to give him the tranquilliser. He uses emotive and persuasive language to play on the feelings of Dr Scott. For example he says, "My consciousness is the only thing I have and I must claim the right to use it". This makes the audience feel more sympathy for Ken as it emphasises the fact that he is paralysed and cannot move, he only has his mind. The language used by the doctors is technical some of the time. Clark did this in order for the audience to take them seriously. However, he also did this in order to help them empathise with Ken's situation. For example when Dr Scott and Dr Emerson are talking about Ken, as if he is not even there, using technical jargon that is hard to understand, such as "the blood urea is back to normal and the cultures are sterile", the audience can empathise because they don't fully understand what is being said so they assume Ken can't really either. ...read more.

If he had not been determined to make other people hear his views on euthanasia, then characters like Dr Scott, who were undecided in their opinion about euthanasia, would not have heard his opinion. In conclusion, Brian Clark uses a wide variety of dramatic techniques to make the audience sympathise and empathise with Ken. Ken's personality creates a lot of sympathy for him because he is a free spirit and he is also a sculptor. The accident left him unable to continue with the things he loves and he therefore doesn't want to live anymore. Also the way in which the other characters treat Ken creates sympathy for him. The way Dr Emerson patronises Ken allows the audience to empathise with Ken, as they feel the same frustration he does. Euthanasia is still a highly controversial topic today. This creates sympathy for Ken because it makes the play seem all the more realistic and believable. Other aspects of the play such as language and structure also allow the audience to sympathise and empathise with Ken. For example the way the play is structured with two acts with an interval in the middle gives the audience a chance to discuss the topic in further detail and they are given more time to empathise with the way Ken is feeling. I personally agree with the judge's decision to allow Ken to be left to die. I believe in free will and quality of life. Ken didn't think his life was worth living after his accident and I respect his decision. Katie Walters Page 1 ...read more.