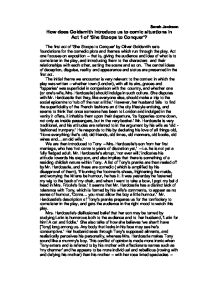 How does Goldsmith introduce us to comic situations in Act 1 of 'She Stoops to Conquer'?

Sarah Jackson How does Goldsmith introduce us to comic situations in Act 1 of 'She Stoops to Conquer'? The first act of 'She Stoops to Conquer' by Oliver Goldsmith sets foundations for the comedic plots and themes which run through the play. Act one focuses on exposition - that is, giving the audience and idea of what is to come later in the play, and introducing them to the characters and their relationships with each other, setting the scene and so on. The central ideas of deception, disguise, reality and appearance and status are presented in the first act. The initial theme we encounter is very relevant to the context in which the play was written - whether town (London), with all its airs, graces and 'fopperies' was superficial in comparison with the country, and whether one (or one's wife, Mrs. Hardcastle) should indulge in such culture. She disputes with Mr. Hardcastle that they, like everyone else, should make a trip to the social epicentre to 'rub off the rust a little.' ...read more.

Mrs. Hardcastle's disillusioned belief that her son may be tamed by studying Latin is humorous both to the audience and to her husband, 'Latin for him! A cat and fiddle.' She also talks of how she believes 'we shan't have [Tony] long among us. Any body that looks in his face may see he's consumptive.' Her husband sees through Tony's supposed ailments, and realistically perceives his personality, whereas Mrs. Hardcastle makes Tony sound like a mummy's boy. This conflict of opinion is made more ironic when Tony enters and is referred to by his mother with affectionate names such as 'my charmer' and he appears to be more individual and rebellious (rowing with and defying his mother) than his mother - with her rose tinted spectacles - admits. It is obvious that her indulgent treatment of her son is a contributory factor to his behaviour. His prankster temperament really comes to the fore when he leads a conspiracy to misdirect Marlow and Hastings and convince them that the Hardcastle residence is in fact an inn. ...read more.

Hardcastle regards as a major attribute. Goldsmith is thus satirising sentimental comedy's perception of virtuous characteristics through this mock-sentimental reference, 'and to crown it all...' Kate, however, claims he has 'frozen [her] to death,' by unveiling this factor of his personality, because she regards this as undesirable quality for a man to have. Although she has this newly adopted reluctance, she still states that 'if he be so young, so handsome, and so everything as you mention, I believe he'll do still. I think I'll have him,' as if she would be doing Marlow himself a favour. The fact is that 'it's more than an even wager... he may not have [her].' Kate is also enlightened to another aspect of Marlow by Constance later in the Act - that he has a dual personality, i.e. he is a respectable gentleman in good company, but not so with 'creatures of another stamp.' This hints at how we will see a contrast in Marlow during the play. The description of Marlow imbues the audience with a sense of comic anticipation - we want to know what will happen, and there seems as though there will be some comic moments when the two of them meet. ...read more.