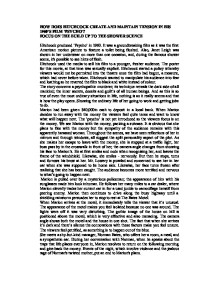 How does hitchcock create and maintain tension in his 1960'S film 'Psycho'?

HOW DOES HITCHCOCK CREATE AND MAINTAIN TENSION IN HIS 1960'S FILM 'PSYCHO'? FOCUS ON THE BUILD UP TO THE SHOWER SCENCE Hitchcock produced 'Psycho' in 1960. It was a groundbreaking film as it was the first American motion picture to feature a toilet being flushed. Also, Janet Leigh was shown in her underwear on more than one occasion, and, during the famous shower scene, it's possible to see hints of flesh. Hitchcock used the media to sell his film to a younger, fresher audience. The poster for this movie, at that time was s******y explicit. Hitchcock started a policy whereby viewers would not be permitted into the theatre once the film had begun, a measure, which had never before taken. Hitchcock wanted to manipulate his audience into fear and loathing so he reverted the film to black and white instead of colour. The story concerns a psychopathic murderer; its technique reveals the dark side of all mankind; the inner secrets, deceits and guilt's of all human beings. And as this is so true of even the most ordinary situations in life, nothing is as it really seems and that is how the play opens. ...read more.

While she's eating he watches her eat extremely closely which is not typical behaviour this unnerves the viewer. Norman bates has a fascination with death you can see this by the images of the dead birds its like his hobby of taxidermy and also there are birds of prey on the walls which give an idea of killing. After seeing this, the audience becomes all tense and frightened thinking of murder. Their conversation includes references to death and entrapment. He says to Marion 'you eat like a bird' (when there are dead birds on the wall) and he also says that 'we're all in our private traps'. This makes the audience know that something is to happen. He also mentions his mum well not directly but he refers to 'we' which implies there is someone else at the house but the viewers don't no who so it leave it as an answered question which is very effective. His conversation show his conflicts with his mother the feeling of hate for her 'illness' this implies hidden secrets. This brings a lot of tension to the audience. The shower scene is one of the most famous sequences ever captured on film for two reasons. ...read more.

The camera angles in psycho were somewhat experimental. It used a wide range of camera shots varying from straightforward long shots to iris shots. Hitchcock was the first person to experiment with this wide range of camera angles. Seeing as this was the first film to use these new techniques, they were used relatively effectively. The use of long shots of the house and then the medium shots of Norman Bates kind of connect the viewers association with the gothic house to Norman making him just as intimidating as the building. One of the most effective shots in the film was the extreme close up of Bates eye when he was looking through the peep hole at Marion getting changed. The only thing in the shot was his eyes and the wall. A beam of light shone through the hole onto Bates eye and this was very effective. This was effective because the scene stood out as his eye appeared through the hole. Psycho was a terrifying film in it's day, and still makes the viewers tense with anticipation of what's to come. Many different and subtle innovative techniques were adopted to manipulate its audience and these techniques are very effective. I think this film was very good even though it's quite old and it's in black and white. ...read more.