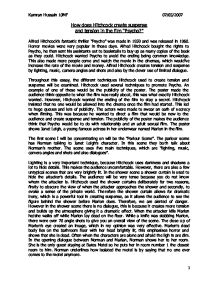 How does Hitchcock create suspense and tension in the film &quot;Psycho?&quot;

How does Hitchcock create suspense and tension in the film "Psycho?" Alfred Hitchcock's fantastic thriller "Psycho" was made in 1959 and was released in 1960. Horror movies were very popular in those days. Alfred Hitchcock bought the rights to Psycho, he then sent his assistants out to bookstalls to buy up as many copies of the book as they could. Hitchcock wanted Psycho to avoid the ending being common knowledge. This also made more people come and watch the movie in the cinemas, which would've increase the rate of the movie and money. Alfred Hitchcock creates tension and suspense by lighting, music, camera angles and shots and also by the clever use of limited dialogue. Throughout this essay, the different techniques Hitchcock used to create tension and suspense will be examined. Hitchcock used several techniques to promote Psycho. An example of one of these would be the publicity of the poster. The poster made the audience think opposite to what the film was really about, this was what exactly Hitchcock wanted. However, Hitchcock wanted the ending of the film to stay a secret. Hitchcock insisted that no one would be allowed into the cinema once the film had started. This led to huge queues and lots of publicity. The actors were made to swear an oath of secrecy when filming. This was because he wanted to direct a film that would be new to the audience and create suspense and tension. The publicity of the poster makes the audience think that Psycho would be to do with relationship and an adult s****l film. The poster shows Janet Leigh, a young famous actress in her underwear named Marion in the film. The first scene I will be concentrating on will be the "Parlour Scene". The parlour scene has Norman talking to Janet Leigh's character. In this scene they both talk about Norman's mother. The scene uses five main techniques, which are "lighting, music, camera angles and shots and also dialogues". ...read more.

When the camera is focused on Norman's face his eyes stare intensely and become threatening this makes Marion feel uncomfortable and nervous around Norman. When the camera focuses on Norman's eye it is just still staring all you see is a little beam of light from the room shinning onto it. The camera shows us Norman's face and beside that there is a square frame. Square frames fit in to Norman's personality because he is difficult to understand. The camera shows us Marian and beside her is an oval frame and that fits in to her personality because she is easy to understand, rounded is symbolic of gentle, soft personality. This adds to the general sense of unease and tension, which runs through the scene. The camera gives us a subjective viewpoint when she looks down at Norman, and when he looks up at Marion. The camera gives us a close up of the book because when talking to Norman, Marion says Crain is her name, but in the book she has signed in a different name/person. This signifies that she is hiding her identity so no one knows that actually she did come to the motel. Another example of Hitchcock using variety of camera shots and angles would be in the shower scene. The shower scene can be broken down into many different frames to help with the interpretation of this part of the film. When Marion is undressing Hitchcock uses long editing to prolong this sequence. This heightens tensions as we have already seen Mr. Bates look through the peephole at her undressing. The longer we wait the tenser we get. When Marion enters the shower the camera focuses on her washing. She is vulnerable because she is naked and has no means of escape in this isolated motel. The camera spends a long time focusing on her washing. While in the shower the camera shot over 70 different angles to give you an overall view of what just happened. ...read more.

Here the audience will be relieved that she is safe. The final technique is the use of camera angles and shots. It again gives us a subjective camera angle, when Lila is looking down at the cellar. When Lila enters the cellar it has the light bulb on the top right hand corner it is a mid-shot when Lila looks at Mrs Bates (Normans mum). It gives us a close up shot of the mother, a long shot of Norman dressed up as his mother, a long shot of Norman because this is when the audience know that Norman was the one who dressed up like his mum and killed Marian and the detective. This shows that he was there when his mum's boyfriend was dead or getting killed. It gives us a close up of the wig and the dress of Mrs Bates. This gives us a dramatic irony, which the audience know something and the characters don't know. This gives us a dramatic irony because the audience knew that the killer was a woman. My feeling towards the film Psycho is that Alfred Hitchcock created tension and suspense by his cleverness. To promote this film and add horror he used many techniques which are Lighting, Camera angles and shots, Music and also by dialogues. Just by using these five techniques Hitchcock has made Psycho a well known horror movie full of tension and suspense. Psycho was not only filmed incredibly well, but it had a fantastic storyline. No matter how good the directing or the acting is you need a good story line and script. "Psycho" had this. It had good characters, irony, humour, repetitions, imagery and a great piece of music. My opinion is that without these five techniques it wouldn't be as good as it is. This film creates a good atmosphere for the audience because; it keeps everyone in tension and suspense. To me it's also a mystery in who is the killer and finding out towards the end. Kamran Hussain 10MF 07/05/2007 1 ...read more.