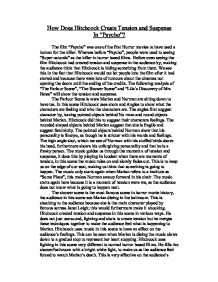 How Does Hitchcock Create Tension and Suspense In &quot;Psycho&quot;?

How Does Hitchcock Create Tension and Suspense In "Psycho"? The film "Psycho" was one of the first Horror movies to have used a human for the killer. Whereas before "Psycho", people were used to seeing "Super naturals" as the killer in horror based films. Before even seeing the film Hitchcock had created tension and suspense in the audience by, making the audience think that Hitchcock is hiding something from them. We see this in the fact that Hitchcock would not let people into the film after it had started and because there were lots of rumours about the cinemas not opening the doors until the ending of the credits. The following analysis of "The Parlour Scene", "The Shower Scene" and "Lila's Discovery of Mrs Bates" will show the tension and suspense. The Parlour Scene is were Marian and Norman are sitting down to have tea. In this scene Hitchcock uses shots and Angles to show what the characters are feeling and who the characters are. ...read more.

He does not just use sound, lighting and shots to create tension but he merges these techniques together to make the audience feel what is happening to Marian. Hitchcock uses music in this scene to have an effect on the audience's feelings. This can be seen when Marian is dieing the music slows down to a gradual stop to represent her heart stopping. Hitchcock uses lighting in this scene very different to normal horror based films. He fills the shower/bathroom with a bright white light, to make us as the audience feel forced to watch Marian's death. This is very affective on the audience's feelings. Furthermore the shots and angles show Marians feelings in a very in depth way. Hitchcock uses angles to capture Marian's death, dramatically. The way he puts together all of the shots taken of Marians death makes the audience feel even more shocked. Marian in one shot holds her hand up in the air towards the camera; as though she is pleading us to help her, we as the audience feel sorry for her as we cant help her. ...read more.

Hitchcock wanted to use this horror convention to unveil Normans mother "Mrs Bates". In this area of the scene when Norman Bates/Mrs Bates finds Lila in the cellar, you hear Norman scream "I am Norma Bates", Norma being his mother's name. Hitchcock did this to let us, as the audience know that Norman has a split personality with his mother. At this time Hitchcock uses the hanging light in the scene to flash between Lila, Norman and the dead Mrs Bates. Hitchcock does this to show the audience everything that is happening in the scene and draws out attention to certain parts. This lets the viewer feel a large amount of tension and suspense. Although "Psycho" was made over 40 years ago, Hitchcock's techniques are still being copied today. Some parts of the film are no longer frightening for a modern audience, for example the stabbing in the shower scene can now be classed as stupidly comical, due to computers and special affects stabbing and cuts can now be shown more realistically, which the present audiences are now used to. ...read more.